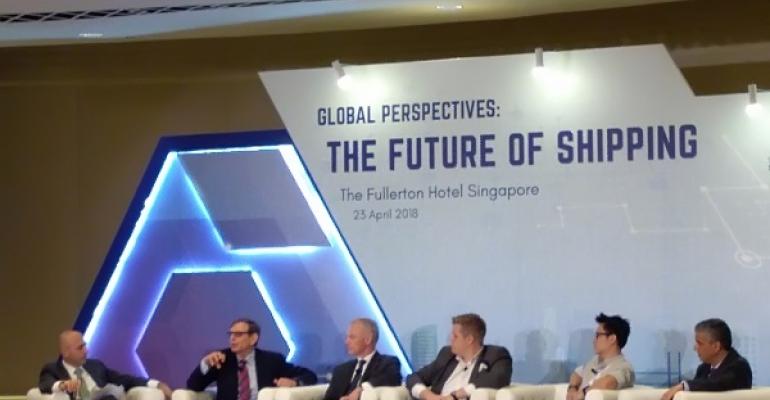 New ways of looking at already new ideas was the thrust of the appropriately named Global Perspectives: The Future of Shipping, a new event at Singapore Maritime Week 2018 where a panel sought to discuss the transformation taking place in the maritime industry and possible disruption of current business models by players outside the industry.

While it was unanimously acknowledged that change would come to the industry, the pace of change was debated. Sagely president of Clarkson Research Martin Stopford who has seen more than his fair share of the history of shipping, pointed out that the nature of the shipping business is very different from that of Grab for example because it is relatively fixed and has until recently had little access to outside communications while at sea. “It’s a steep learning curve,” he suggested.

Others from so-called disruptive industries that had been invited to the panel were more discrete. Group chief crossborder officer from Lazada Group James Chang while pointing to how the disruptive online retailer has adopted technology much quicker with innovations such as predictive technology in its logistics chains for example, suggested that changes in terms of the corporate culture in shipping may be harder to effect.

Singapore country head for Grab Lim Kell Jay noted that the asset-light taxi substitute company started on a digital platform from the outset and in a subtle reference to shipping, suggested it as such, had “no baggage”.

Finally Tal Drory, an Artificial Intelligence (AI) expert from IBM reiterated that “AI is the next IT, (and) will bring a major breakthrough and influence each industry.”

Continuing the debate on the use of AI, different opinions were raised on how much data is actually needed to make good decisions. Drawing an example from the world of Formula 1 racing, Stopford suggested that it was not the sheer amount of raw data that was important but looking for specific data that was most relevant to operations.