News and insights on what is happening in the world of the container shipping industry covering technology, freight rates, fleet capacity, new buildings and services. 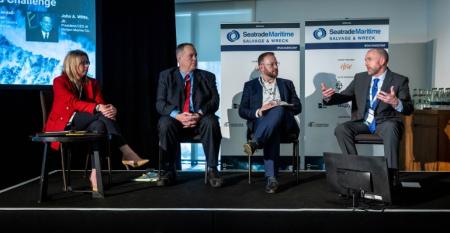 We cannot prepare for mega vessel casualties: UK SOSRep
Dec 02, 2022
The salvage industry cannot realistically fully prepare for the casualty of a mega vessel, according to UK SOSRep, as the variables and...

Stormy waters ahead and laid-up boxships likely
Dec 01, 2022
The Xeneta Shipping Index (XSI) has fallen more sharply in November than at any time since it was launched in 2019 plunging by 5.7%.

Maersk and IBM pull the plug on Tradelens
Nov 30, 2022
AP Moller – Maersk and IBM are pulling the plug on the Tradlens digitalisation platform for shipping saying it has failed to achieve full global industry collaboration.

How would an ammonia spill affect the marine environment?
Nov 29, 2022
Some of the maritime industry’s most successful safety requirements were a reaction to fuel and cargo spills, but what are the risks with future maritime fuels?

Salalah Port launches service to transport goods from China to Yemen via Al-Mazyouna
Nov 28, 2022
The Port of Salalah has partnered with Maersk to launch a new multimodal transport service to Al-Mazyouna Free Zone.