The latest news and developments in the shipping and maritime logistics, ports, container and breakbulk lines. 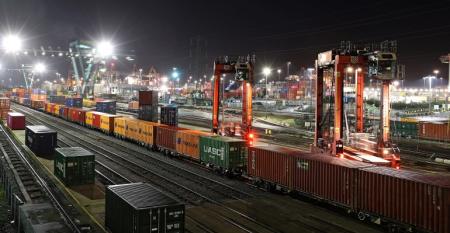 DP World partners with Shanghai’s Lin-Gang Special Area
Nov 03, 2022
DP World is expanding its operations in China with a Memorandum of Understanding (MoU) to support logistics and...

Cosco divests stake in Duisburg new terminal
Oct 31, 2022
Cosco Shipping Ports has announced it will divest and sell its shares in the construction of the new Duisburg Gateway Terminal (DGT) in Germany.

Hamburg port replaces trucks with ships for internal transfers
Oct 17, 2022
The Port of Hamburg is set to use feeder ships for transhipments in a bid to reduce road congestion and cut carbon emissions.

‘Potential feeder containership shortage’ in Mediterranean
Oct 10, 2022
The higher average age of the Mediterranean feeder fleet could lead to a shortage when new environmental regulations come into...

Less trucks, more barges – US Marine Highway investments
Oct 10, 2022
The US Maritime Administration (MARAD) has awarded just under $39m in grants under the Marine Highway programme, triple the...

Hapag-Lloyd in $1bn deal to buy SAAM’s logistics and terminals
Oct 04, 2022
Chile-based SAAM has agreed to sell its port terminals and logistics operations to Hapag-Lloyd in a $1bn transaction.

Saudi Arabia ‘could have its own Belt and Road Initiative’
Sep 28, 2022
Shipping and logistics experts see the opportunity for Saudi Arabia to develop into a regional logistics hub taking advantage of its position at the crossroads of three continents.

UK port strikes compound with supply chain issues
Sep 21, 2022
Delays from ongoing strike action at the Port of Liverpool will be lesser than those from Felixstowe, but still compound with upsatream and downstream logistics issues.
Load More