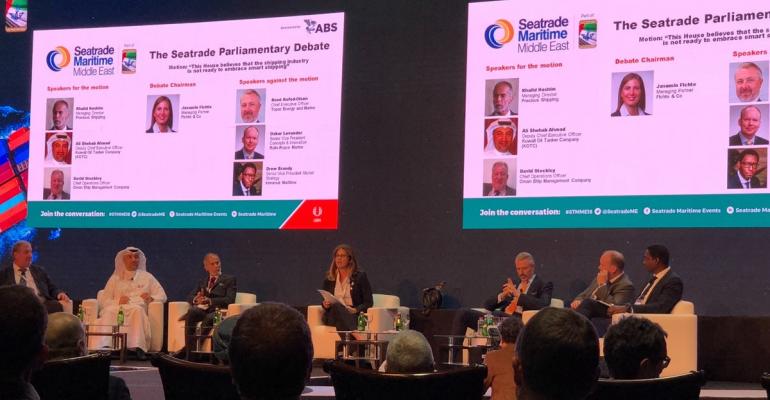 A hugely successful UAE Maritime Week came to a conclusion on 1 November, ending fittingly for a country positioning itself at the leading edge of technological advancement with UAE Maritime Innovation Day.

The Week had encompassed some 30 different events and conference sessions – including the three-day Seatrade Maritime Middle East (SMME) event as well as the gala dinner for the Seatrade Maritime Awards for the Middle East, Indian Subcontinent and Africa – under the auspices of the Dubai Maritime City Authority (DMCA) and patronage of H.H. Sheikh Hamdan Bin Mohammed Bin Rashid Al Maktoum, Crown Prince of Dubai.

In the keynote address at the opening Dubai Maritime Summit, the ceo and md of the UAE Region of DP World, Mohammed Al Muallem, said that the UAE was increasingly becoming the maritime epicenter of the region, thanks to it having become the first Arab nation to be elected to the 40-member IMO Council under Category B for countries with the largest interest in international seaborne trade.

“Despite the current trade wars and environmental challenges, global trade is expected to grow by 34% by 2030,” he said. “This will necessitate continued investment in port infrastructure and the logistics supply chain.”

At a glittering function the same night, the 15th anniversary Seatrade Maritime Awards covering shipping and logistics were presented in 16 different categories, the winners judged by an independent panel of leading industry figures.

In addition, there were a number of special recognitions including The Global Maritime Community Award for H.E. Dr Abdulla Belhaif Al Nuaimi, Minister of UAE Infrastructure and Chairman of the UAE Federal Transport Authority.

The Seatrade Maritime Middle East conference and exhibition that began the following day, sprawling across three conference halls and including two separate conference areas that were fully utilized throughout, drawing near-capacity audiences for each.

Star attraction on the opening day was the parliamentary-style debate on whether or not the maritime industry was ready to embrace smart shipping. An audience of close to 200 watched enthralled as two panels of three eminent opinion-makers each, led by Precious Shipping md Khalid Hashim and Topaz Energy and Marine ceo Rene Kofod-Olsen, argued both sides of the case.

The eventual result, garnered by an audience vote, was so close as to be separated by a single vote… in favour of the Kofod-Olsen’s team who felt the industry was indeed ready to embrace smart shipping.

Among the most-admired exhibits on the SMME exhibition floor was a scaled-down model of the DP World Cargospeed hyperloop transportation solution. Delegates were ushered into the pod, which was roughly three times smaller than the planned prototype, for an absorbing video experience on the new mode of transport that seeks to revolutionise the cargo industry by delivering palletised cargo that travels in pods at speeds of up to 1,000 km per hour.

A pool table kindly provided on the stand of Saifee Ship Spare Parts and Chandlers also proved a more relaxed alternative to the various networking zones and lunch area.

At the conclusion of the exhibition, the UAE Maritime Innovation Day was organised by DMCA in partnership with DNV GL; Albwardy Damen also hosted a half-day visit for attendees to is shipyard in the Hamriyah Freezone at Sharjah.