Explosion risk is flaring up on land and at sea 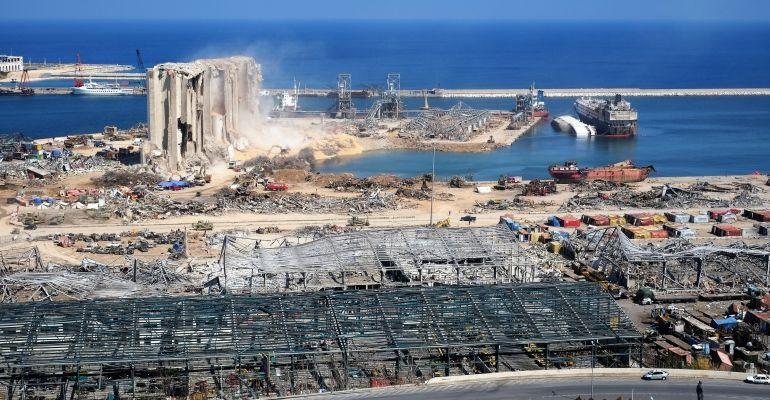 Port of Beirut explosion: photo taken days after the explosion from an adjacent building
In August 2015, two consecutive explosions at a container storage station in China’s Port of Tianjin killed more than 170 people, injured nearly 800 and resulted in billions of dollars in damage. When such a disaster occurs, there are always lessons to be learned to prevent future occurrences.

Unfortunately, five years later, on August 4, 2020, there was another massive explosion in a very active seaport. This time it was in the Port of Beirut. The blast ripped through the Lebanese capital, killing 218 people, injuring 7,000, damaging 77,000 apartments and leaving 300,000 displaced. It caused an estimated $3.8-4.6 billion in material damage. This incident is considered one of the biggest non-nuclear explosions to have been recorded.

After the explosion at Tianjin, there was the push to evaluate what happened to ensure that it would never happen again. But then it did, in Beirut, bigger and more destructive than what happened before in China.

Despite the lessons that can be learned from past incidents, the frequency of maritime explosions appears to be on the uptick. They have occurred on ships at sea, in ports and on moored ships.

In early June 2022, a container depot near the port city of Chittagong, Bangladesh saw several containers on the property explode and launch into the air. The private facility typically stored clothing and other items ready for export. Apparently, hydrogen peroxide, the chemicals stored in containers, was allegedly without authorization, destined for use in the textile industry. Because the containers were labelled incorrectly, firefighters did not know what they were dealing with. They started to fight the fire with water, not firefighting foam, which resulted in further explosions. Nine of the 49 people killed in Chittagong were firefighters.

While fires and explosions on ships have been an issue for centuries, the issue is growing, due largely to an increase in hazardous materials being shipped. According to the United Nations Conference on Trade and Development’s Review of Maritime Transport 2021, the amount of chemicals being transported by marine vessels worldwide in terms of ton-miles, or one ton of freight carried over one mile, has increased by about 88 percent over the past two decades.

Despite the lessons that can be learned from past incidents, the frequency of maritime explosions appears to be on the uptick. They have occurred on ships at sea, in ports and on moored ships.

What’s in a name?

Plenty. Non-declaring what’s being shipped is at the root of many fires and explosions at ports and aboard ships. Shippers have been misdeclaring or under-declaring hazardous materials for years, especially in containerized shipments due to various reasons, like escaping customs duties and taxes, hiding the value of the cargo, or to hide the illegal nature of the cargo or even the real weight.

If shipping a pure chemical substance, it’s easier to determine a products shipping names or UN (United Nations) number, a four-digit number that identifies hazardous materials in international transport. For hazardous compounds or manufactured goods that may contain hazardous materials, like a lithium battery, it can be more difficult. Calcium hypochlorite, a disinfecting and bleaching agent with a tendency for self-ignition, has been responsible for many fires in recent years. For instance, calcium hypochlorite may be misdeclared as calcium chloride. Other names encountered in the past have included: BK Powder, CCH, Hy-chlor and Chloride of lime or Chlorinated lime. (Here’s some helpful property naming guidance: How to Determine Correct UN Number and Proper Shipping Name (chemsafetypro.com).

Misdeclaration helps avoid paying a premium for shipping. It can also save on a separate container. One shipping container may carry various items for different shippers but depending upon the property of the material, cargo deemed hazardous requires a separate container and an appropriate and secured stowage location. Even when the container has space to occupy more cargo, no other cargo should be put in a shipping container with hazardous materials. This can lead to hazardous cargo being stowed incorrectly on ships, putting the ship and crew at risk.

A confusing web of regulations

Hazardous material transported by sea needs to comply with various regulations that address appropriate packing, storage and communication between authorities and parties involved in the shipping process.

Ships carrying hazardous materials fall under the jurisdiction of the International Maritime Organization’s Dangerous Goods Code (IMDG Code). The code resulted from the 1960 Safety for Life at Sea (SOLAS) Convention. The SOLAS convention is regarded as one of the most important of all international treaties related to the safety of merchant ships. In 1914, the first version of the SOLAS convention was adopted in response to the Titanic disaster. The IMDG code was the result of the fourth SOLAS Convention. Considered the first major achievement for the International Maritime Organization (IMO), the code was a big step forward in modernizing regulations to keep up with technical developments in the shipping industry.

The IMDG Code provides a suggestion on how to declare dangerous materials, store them on vessels and transport them. Available in six languages, the latest version of the code was released in January 2020. But many find the code a complex document and highly technical in a lot of places.

The IMDG code is for the cargoes which are carried in packaged form and covers approximately 3500 products. However, there are many ships that carry solid, liquid, and gaseous cargo in bulk, among them:

Even before the IMDG Code, the marine and fire protection industries saw fire and explosions as a growing industry problem. After World War I, cargo vessels, including tank ships, were converted to carry larger cargos. This led to incidents of fires and explosions during shipbuilding, repair, and conversion. All those involved, from vessel owners and shipyard owners to their insurers, raised concerns.

To address those concerns, in 1922, the National Fire Protection Association (NFPA), an international organization dedicated to fire prevention, and its Marine Committee adopted a series of standards known as the Regulations Governing Marine Fire Hazards which includes regulations that address the control of gas hazards on vessels during repair activities. Today it is known as NFPA 306 (Control of Gas Hazards on Vessels).

The NFPA provides many resources to help the industry address their fire and explosion challenges. For one, to help prevent instances like what happened in Chittagong, NFPA 1405, or its Guide for Land-Based Fire Departments that Respond to Marine Vessel Fires, provides direction on what elements are necessary for a comprehensive marine fire-fighting response program for land-based fire fighters.

Stepping up responsibility and enforcement

The movement of cargo, its storage and regulation are disjointed. Cargo changes hands all along the supply chain. There are a lot of hands in the mix. That means everyone needs to uphold their responsibility in the product’s journey from shippers to ship masters to storage facilities to port authorities tasked with enforcing existing regulations.

The tragedies in Tianjin, Beirut, and Chittagong are reminders of what can happen when complacency prevails.

The cost of these incidents extends far beyond these ports. An explosion in a key port was the last thing that an already-shaky Lebanese economy needed. The mass destruction of communities within a 6-mile radius left the economy in ruin and created a humanitarian crisis. Rebuilding has been challenging because of supply shortages.

The global pandemic disrupted supply chains. These events did not help. According to local trade associations, 90% of Bangladesh's trade which includes clothing headed to H&M, Walmart and other retailers – passes through the Chittagong port. As a result of the explosion, hundreds of millions of dollars’ worth of garments were destroyed in the fire. When the Felicity Ace caught fire off the coast of Portugal in February 2022, more than 4,000 cars, many luxury, valued at $400 million were lost.

And, quite literally, in many cases, everyone pays. General Average is a principle of maritime law. The law establishes that all sea venture stakeholders – owner, shipper, charterer, consignee – proportionately share in losses that resulted from a voluntary sacrifice of a portion of the vessel or cargo to save the voyage in the event of an emergency – whether their shipment or vessel was damaged or not.

The shipping industry is experiencing unprecedented growth. More materials – hazardous and non – are being shipped all over the world. The growing frequency of fires and explosions are reminders that with increased activity brings added risks and responsibilities.

There should be little tolerance for misdeclared or mislabeled goods, improper storage, or shoddy port protocols. There is plenty of solid guidance to take necessary precautions in the handling, shipping, and storage management of hazardous materials. It’s time to step up efforts to disrupt the all-too-frequent incidents of maritime fires and explosions. In our efforts to protect the safety of crew, ships and the environment, the Marine Insurance community should unite and collectively decide whether a loss resulting directly from a misdeclared cargo shall be indemnified. This would be accomplished by instituting policy language that denies coverage on a claim where the supporting documents clearly show that a cargo was misdeclared. Carriers themselves should not continue to support shippers that willfully misdeclare cargo putting crews, ships, the environment, and cargo at risk.

About the Authors
Anne Marie Elder is the global chief underwriting officer for marine at AXA XL, a division of AXA. As CUO, she leads the company’s global marine business. She is a leading expert on Inland and Ocean Marine insurance with more than 30 years of experience. She previously held a US Coast Guard Unlimited Tonnage Third Mates license and was a commissioned officer in the US Naval Reserve.

Jarek Klimczak is a Senior Risk Consultant with AXA XL’s Marine insurance business in the Americas. He brings more than 33 years of maritime, logistics, insurance, and risk management expertise to his role. He also has extensive experience within the shipping and logistics industry with a focus on loading security, heavy-lift operations, and towage as well as deep skills in cargo security and risk management. He can be reached at [email protected].