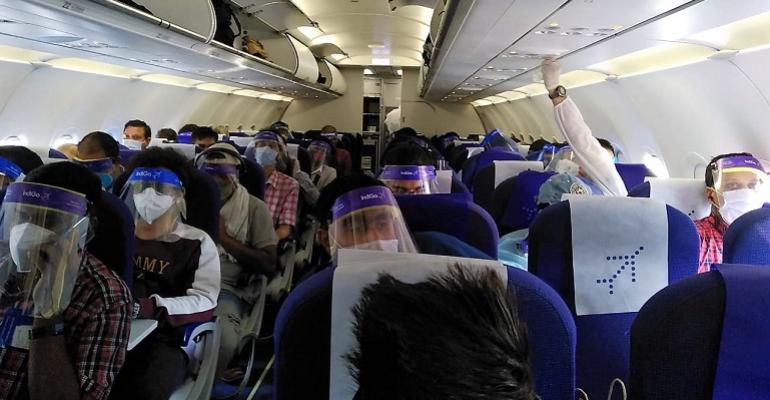 Anglo-Eastern repatriating Indian seafarers on charter flight
An estimated 240,000 Indian seafarers employed on ships worldwide face a bleak future on several counts, not least amongst which is the prospect of making a huge payout by way of income tax

Some 40,000 of them are stuck in ports overseas, and have no way of making their way back home, due to the closing of international borders for most modes of travel. Others joining vessels at Indian ports are being hit indirectly by the high costs of crew changes charged by unscrupulous agents.

Still others are being worried about suffering collateral damage by way of losing their NRI (non-resident Indian) status as a result of a lengthy period (over 100 days) of inactivity at home during the series of lockdown measures adopted by the central or state governments since mid-March 2020, to contain the threat posed by the Coronavirus pandemic.

Seafarers have to remain outside the country for at least 184 days in a calendar year, in order to qualify for the NRI status that allows them to avoid paying income-tax in India on their earnings. Normally, contracts in shipping stretch between four and seven months; so seafarers manage their required overseas time by working one extended contract or two of the shorter terms.

There are thousands of Indian seafarers who are anxiously waiting to join ships after coming onshore as far back as July 2019 on completing their previous assignment. A few months break for them was about to end when they were called to join ships in December/January. However, as the joining formalities were being worked out, the Covid pandemic struck, and halted all crew changes, mainly due to the complete stoppage of international flights to and from India, from mid-March.

“Thousands of seafarers have worked outside India for less than 184 days in the financial year 2019-20,” said Abdulgani Serang, general secretary of the National Union of Seafarers of India (NUSI). “These seafarers are at risk of losing their NRI status; and with it, around one-third of their hard-earned salaries.”

Their situation was made even worse when Finance Minister Nirmala Sitaraman, in her 2020-21 budget proposals presented on February 1 this year, proposed extending the period of being outside the country to 240 days – nearly eight months – for NRI qualification. When this proposal is ratified, some sailors will have already been at home for over three months, leaving them a wafer-thin period of time at home in the rest of the financial year.

Maritime families are venting their frustration because, whatever actions the government is taking appear to be knee-jerk reactions, instead of a well thought-out plan. Ships travel with limited crews; and, if even one crew member falls sick, the workload for the others increases vastly. If three or four of them fall sick to the contagious Coronavirus, the stress on the healthy crew members would be massive.

“Indian seafarers have started losing jobs to low-cost, unskilled workers from other countries as crew change turns cumbersome,” an Indian captain of an oil tanker sailing towards China was quoted as having said recently, after completing eight uninterrupted months on board.

The Directorate-General of Shipping (DGS) has estimated that 3,620 Indian seafarers would have lost their jobs to other nationalities on board ships between March 23 and June 30 as the lockdown restrictions derailed crew change plans both in India and overseas.

They would have been struck by a double-edged sword as their overseas earnings in fiscal 2019-20 were being eyed by the Indian taxman.