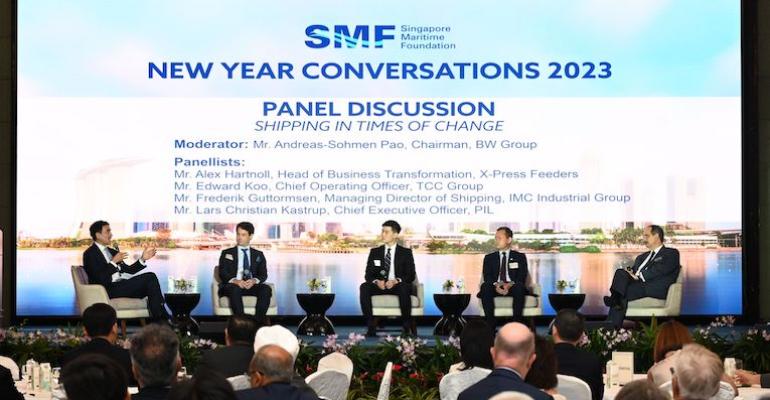 Despite all the talk in recent years about the corporatisation of shipping the family-owned business remains a very key part of the industry with younger generations moving through and taking control.

A very clear example of the continued strength of the family-owned business in shipping was demonstrated at the Singapore Maritime Foundation (SMF) New Year Conversations 2023 panel discussion last Friday.

The panel was chaired by Andreas Sohmen-Pao, Chairman of BW Group, a third-generation shipowner running a group that combines both private and public entities, a model that is also favoured by many large Greek family shipowners. But more strikingly Sohmen-Pao was far from the only multi-generational family shipowner on the panel.

Related: Why shipowners are not investing in tanker and bulker newbuildings

The panel also featured Alex Hartnoll, Head of Business Transformation, X-Press Feeders. Alex is a younger member of the Hartnoll family that founded X-Press Feeders some 51 years ago in Singapore and remains in control of what has become one of the largest container feeders globally, with a mix of family and corporate management.

Another well-known shipping family name was featured in the form of Edward Koo, Chief Operating Officer of TCC Group. TCC Group was founded by the Koo family over 100 years ago.

Frederik Guttormsen represented another family-owned shipping group IMC Industrial Group. Guttormsen is Managing Director of Shipping for IMC, which is owned by the Tsao family, and of which second-generation Fredrick Tsao is chairman.

Only Pacific International Lines (PIL), represented by Chief Executive Officer Lars Kastrup is not family-controlled, although it was until about two years ago when the Teo clan were forced to seek bankruptcy protection and the company was rescued by Singapore’s Temasek Holdings. SS Teo does though remain Executive Chairman and was present in the audience.

Given the composition of the panel it was almost inevitable that some point the discussion would turn to the family ownership of shipping businesses versus the public model.

In discussions on how the Covid pandemic had transformed the working environment with hybrid working, greater concern over mental health and expectations of employees, Sohmen-Pao asked if there was difference between the role of private, family-owned companies and large public-owned entities and conglomerates. The answers covered a broad range of how shipping operates, and how family-owned businesses have advantages in long-term planning combined with an ability to make counter-cyclical investment decisions.

Edward Koo said there were virtues in both the family-owned and public-held models, with the former prioritising control and the latter funds. But when it comes to making those all-important counter cyclical decisions this is not so easy for the public-owned entity. “But I would say if you are managing other people’s money, if you have external stakeholders and shareholders to be responsible for, that intuition suddenly becomes not so intuitive. So, I would say there is still a lot of value in family businesses in shipping.”

For the public-owned company shareholders would question investments in poor markets that will not bring immediate quarterly returns, despite asset prices being much more preferable. At the same time in highly profitable markets it is frowned upon for public companies to sit on large amounts of cash meaning that investments are made at the top of the cycle in terms of value.

Alex Hartnoll commented on the ability of family-owned shipping businesses to invest for the long term. “Historically family businesses have done well in shipping,” he said, noting that this was in part because family businesses took that long term view, which is not so relevant for institutionally owned companies.

For all these positives PIL arguably shows the vulnerability of private-owned family businesses having succumbed to pressure from creditors in the early part of 2020 resulting a court mandated restructuring and a rescue package from Temasek Holdings. But there are a few points to bear in mind here.

Firstly, had PIL been able to hang on for a few more months it would have been a very different story as the sharp, and unprecedented upturn in container shipping markets would have quickly alleviated its financial pressures.

Second, plenty of public companies end up seeking bankruptcy protection in hard times, however, the process is less dramatic in the sense that the owners are institutional investors rather than a private family that can see generations of hard work being taken away from them. It does perhaps underscore the virtue of family-owned companies with public entities, which both provides greater access to capital, and if one of the public-owned businesses does run into trouble restructuring is limited to that entity.

A third point worth noting is that despite the huge capital requirements of modern global container shipping two of the sectors three largest companies are privately held with MSC and CMA CGM owned by the Aponte and Saade families respectively.

The pressure of regulations

Another pressure facing particularly smaller-to-mid-sized family shipowners is the cost of complying with regulations. Sohmen-Pao asked the panel how it perceived the situation of smaller companies with the “onslaught of regulation and change”.

Edward Koo commented it that it was like a tidal wave coming towards companies, but also highlighted how in hubs such as Singapore with a strong community across the value chain, including owners, charterers, and insurers they could work together. “I think what Singapore can do to really help the industry actually, is creating initiatives driving efforts to convert relationships into partnerships, and long-term partnerships.”

Collaboration has very much become a theme in shipping with the goal to decarbonise the industry, something which is recognised to be too large for any single company, no matter how big they are.

In terms of the scale required to meet regulations this has helped the continued growth of third-party ship managers who take an individual owner’s burden of compliance and spread it across a much larger fleet and organisation. It’s worth noting some of those managers such as Singapore’s Thome Group are also family-owned businesses.

Despite the ever-growing pressures of running a global shipping business the family-owned model remains strong, it does certainly have its advantages, and is set to remain both a key, and relatively unique, part of the industry.