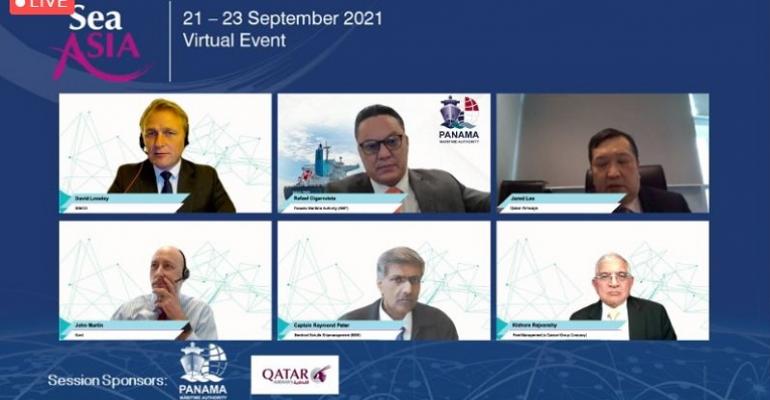 With the crew change crisis having dragged on for the better part of two years seafarer vaccination and global cooperation were seen as key to long term solution by a panel of senior executives from across the shipping industry.

The panel – an Industry dialogue: proactive and practical solutions for the crewing crisis – held on the third day of Sea Asia 2021 sought to find solutions to the crew change crisis beyond the actions of individual companies, and even those of individual states. It was chaired by David Loosley, Secretary General and CEO of Bimco, who said: “Despite the challenges our industry, of course, has adapted to the unpredictability, the everchanging landscape and implemented some very clever workaround solutions. But this is a temporary way of working, it is not sustainable.”

In terms of ensuring both safer crew change and working environment for seafarers vaccination has been regarded as key for some time now, however, as of the start of September just 21.9% of seafarers had been vaccinated according to the Neptune Indicator monthly study.

“Number one on my list, is the vaccination, a lasting long-term solution. that is if there can be a long-term solution. Everyone says we have to learn to live with Covid perhaps that can apply to seafarers relief as well,” said Kishore Rajvanshy, Managing Director of Fleet Management.

He said that I was important that crew were vaccinated in large numbers as early as possible so that any that the severity of the illness would be less for any seafarer that contracts Covid.

The US was seen as leading the way, and Fleet has managed to vaccinate crews of 150 vessels trading to the US, with some European countries such as Netherlands and Germany following suit. In Asia Martin noted that Singapore had just announced a pilot vaccination programme for joiners, with some restrictions. “But I'm really hoping that will start to catch on in Asia, because of course, so many of the seafarers are coming from Asia,” he said.

Meanwhile Rafael Cigarruista, General Director Merchant Marine of the Panama Maritime Authority, said that Panama was looking into vaccinating seafarers while vessels were in transit of the Panama Canal.

Capt Peter Raymond, Managing Director of Bernard Schulte Shipmanagement in Singapore, however, pointed out the reluctance of some seafarers to be vaccinated and the need for education to counteract negative social media. “Many of our ship staff we spoke to were apprehensive because of the negative social media surrounding vaccinations,” he said.

The company has also encountered issues with for example Russian seafarers who had the Sputnik vaccination which is not recognised by other countries, and having to explain to the crew that a second vaccination would be safe.

As well as vaccination Gard’s Martin said states needed to cooperate on facilitating crew change. “I think the cooperation of states towards the subject of crew changes, is probably what is most urgently needed. States do need to protect themselves, of course, but seafarers have taken proper precautions, and as the managers will tell you the paperwork and the bureaucracy that has to go into crew changes is astonishing, quarantine and testing and so forth,” he said.

“I think when states start to work together we will rapidly see progress, but I don’t think we’ve quite got to that point yet.”

The Panama Maritime Authority’s Cigarruista concurred saying, “We do need everybody to be on the same page….we are pushing hard. We actually asked the IMO for help in some countries because vessels are stranded over there and we cannot get cooperation from local authorities. So the solution has to come from everyone, if we do not unify we will not be able to provide the solutions crew members are expecting.”

Giving a perspective from outside of maritime Jared Lee, Vice President Sales Qatar Airways Southeast Asia and South Asia Sub-continent, related the need for cooperation to recognising seafarers as key workers.  “In my opinion the issue relates back to the recognition seafarers as essential service providers and from there you can move onto internationally agreed protocols for the movements of crew across borders in periods like this.”