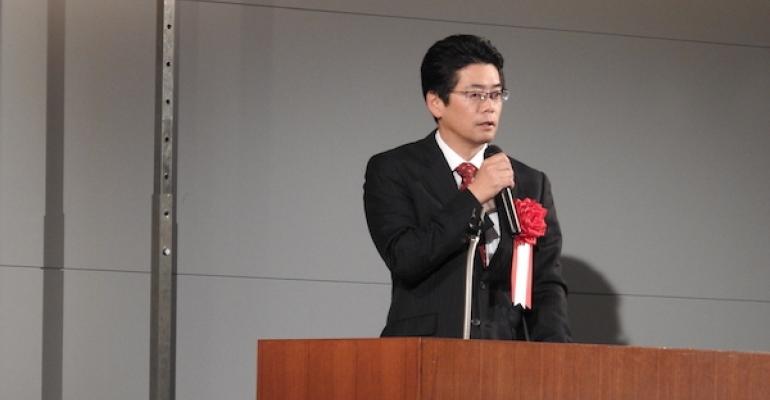 Mitsuyuki Unno, executive director, The Nippon Foundation
The autonomous ship, and technological developments in maritime, were very much on the agenda with keynote speakers from Japan and Norway at the opening of Sea Japan 2018 in Tokyo on Wednesday.

The development of the autonomous ship was flagged-up by both Mitsuyuki Unno, executive director, The Nippon Foundation and Daniel Bjarmann-Simonsen, State Secretary of the Ministry of Trade and Industry, Norway, highlighting the huge potential change that autonomous ships could bring in their keynote addresses.

“We’re also about to enter the autonomous shipping revolution, some argue that the autonomous ship will change our industry like the smart phone has changed life on the planet,” said Bjarmann-Simonsen. “I am convinced Norway and Japan will be leaders in that revolution.”

In his address Unno of the Nippon Foundation noted that the shipping industry was undergoing change must faster than had been expected. He believes that an important factor in the development of autonomous shipping is the impact unmanned ships will have on people's lives. Unno noted in his speech it would result in changes for shipbuilders and shipyards, logistics and insurance.

Speaking to Seatrade Maritime News Unno expressed concern that the shipping industry itself was not keen to embrace the concept of autonomous ships.

“Unfortunately at this time most of the maritime industry is in resistance and it’s the governments that are moving, there aren’t many participants from industry and that’s something I’m a bit concerned about. I feel that it is one of the Nippon Foundation’s responsibility to form a wider platform for this to grow,” he explained.

The Nippon Foundation is a key benefactor of the international maritime industry and has been involved in funding and supporting a wide range of initiatives in the industry related to areas such as safety of navigation.

A commercial reality check for autonomous shipping in 2018

The foundation believes that the general public needs to understand autonomous shipping so that they support its development and this end the Nippon Foundation is looking to present a prediction of the future in of shipping 2040 to the public within the next year.

On concerns over the impact of employment of people if ships are unmanned he said in his speech that more people would be required to work in back-up functions offices ashore, with a broad range of skills required, and these would include seafarers.

“Obviously we want to see about providing funds to venture companies and companies in different industries. I think there is need for us to think about a possible new scheme to fund companies in this industry,” he said.