Sulphur cap could be golden opportunity for shipowners 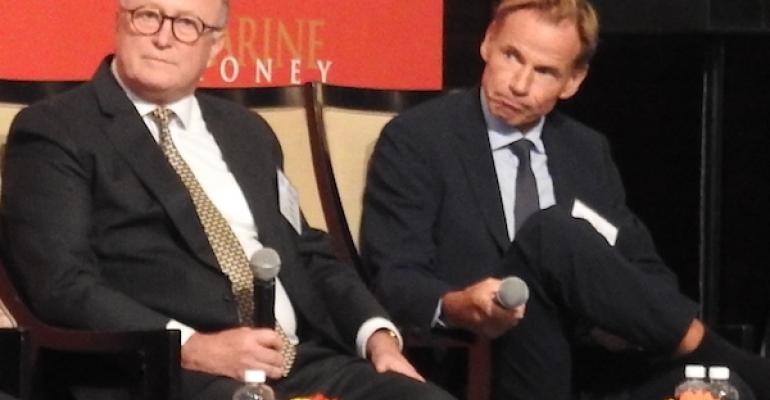 The global sulphur cap is starting to look like an opportunity for the shipping market to finally push through some reasonable freight rate increases, judging from the undercurrents at the Ince & Co business briefing on IMO regulation that kicks in on 1 January 2020.

While there was some discussion as to whether owners would actually consider using scrubbers and the merits or otherwise of doing so, the broad thrust of the forum, certainly from the owners and operators side of the room, seemed to be directed towards the prospect of rate rises.

Wah Kwong Maritime Transport ceo David Palmer kicked off the conversation when he asked: “The other side of the equation is what’s going to happen with freight rates when 2020 comes along?”

Giving the example of a typical owner-operator which would be suddenly staring down the prospect of sharply reduced earnings and possibly even bordering on losses with the mandatory use of much costlier low sulphur fuel, he said: “I think the answer is we’re going to see bunker surcharges coming in from operators who are buying the bunkers who will pass on that cost to the end user”, noting that it is therefore not just about the additional cost of buying a scrubber and maintaining it while also adding that the result is far from certain. “The shipping industry does thrive on crisis and that may be part of the salvation for the freight problem,” Palmer suggested.

He noted however that it is much more problematic in the bulker and tanker sectors where these elements do not exist. “They’re going to have to basically pass on the cost to the customer through cost of freight which may take some time,” Cresswell noted.

He warned: “However I think that’s a very serious issue because you could bankrupt lots of companies who have to pay for the extra cost of shipping themselves. You could see quite a lot of companies in very dire straits if they can’t pass on the cost of bunkers.”

ONE, OOCL and APL say shippers must pay additional costs of sulphur cap

Anglo-Eastern ceo Bjorn Hojgaard in turn highlighted the fact that with 98% of ships in the global fleet having to burn more expensive low sulphur fuel: “If it gets expensive enough what will happen is what we’ve seen before that… ships will start slow steaming and freight rates will go up because it takes supply out of the market; so that’s my guess, that freight rates will go up.”

He added that with the likely need to move various combinations of fuel and lubricants and their respective blends between refinery ports and bunkering ports, ton-mile demand is likely to go up which should also be positive for freight rates.

From the liner point of view, although he acknowledged that there will be some volatility while both the lines and their customers get a better feel of the market, Hong Kong Liner Shipping Association secretary-general Roberto Giannetta pointed out that with the recent consolidation, “the shipping lines are going to have a stronger position than they did let’s say three to five years ago”.

Pointing out the stark realities of the market, Pacific Basin Shipping ceo Mats Berglund highlighted the fact that in the dry bulk and tanker markets, the cost of fuel is essentially a pass-through cost. Thus, he said: “So long as the majority of the fleet burns low sulphur the market will adjust.”

Berglund emphasized: “This is primarily a fantastic opportunity to tighten the market.” He pointed out that since owners and operators adjust speed based on the fuel price, there can be sharp differences depending on the different prices of fuel.

“That will slow down the average speed of the fleet and tighten the supply/demand balance dramatically,” he reiterated.

While acknowledging that the effect was not as pronounced on the smaller ships that Pacific Basin runs, Berglund maintained: “We don’t want it to happen, we don’t think it will happen on handysize but maybe it will happen on supramaxes.”

He concluded: “We will have to do what we have to do to create the best financial result for our shareholders but we certainly will not lead the adoption of scrubbers.”