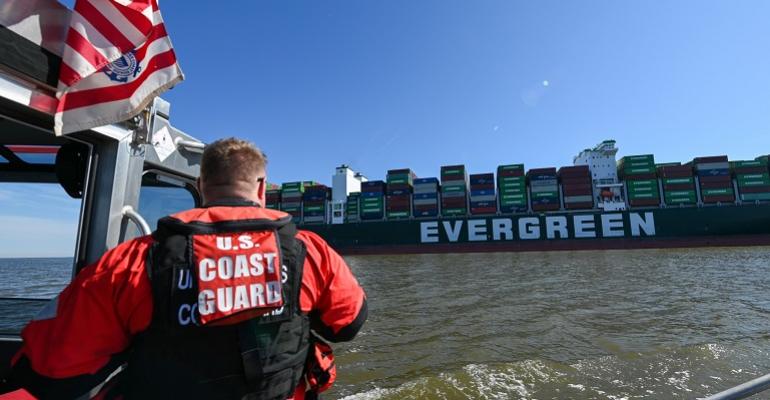 A USCG response boatcrew from Coast Guard Station Curtis Bay monitors the vessel Ever Forward,
Evergreen has declared General Average on the grounded containership Ever Forward after two attempts to refloat the vessel failed.

The Ever Forward grounded in Chesapeake Bay on 13 March after leaving Baltimore Port and attempts to refloat the ship on 29 and 30 March following dredging around the hull have proved unsuccessful.

“Evergreen Line has been making every effort to refloat the stranded ship on behalf of the common interests of cargo owners and the safety of all involved. In light of the increasing costs arising from the continued attempts to refloat the vessel, Evergreen declared General Average today,” Evergreen Marine said it a statement on Thursday.

Declarations of General Average (GA) are controversial with shippers as they have to pay security to release their cargo as all parties including cargo owners are responsible for a share in the loss. It affects all shippers includes those with boxes on the vessel through slot sharing agreements with other lines.

The use of GA has become increasingly common in recent years for large containership casualties including last year by Evergreen in the case of the Ever Given which blocked the Suez Canal for six days in March 2021.

Related: Ever Forward stuck aground outside Baltimore port

Unlike the Ever Given, the Ever Forward is not blocking the shipping channel and navigation to the Port of Baltimore remains open, however, the vessel is stuck hard aground. Smit – Donjon are salvors for the ship.

“Considering that the complexity of further rescue operations will require more manpower, equipment and costs to refloat the stranded vessel as soon as possible, Evergreen has for cautionary purposes declared General Average and nominated Richards Hogg Lindley as the GA adjuster,” the shipping company said.

It is not clear what the next steps are in salvage operations but it will likely involve lightering the Ever Forward of fuel and cargo.

The 12,000 teu, 2020-built Ever Forward grounded 13 March in the Chesapeake Bay near Craighill Channel after sailing from the Port of Baltimore bound for Norfolk, Virginia. The cause of the grounding remains under investigation.

The grounding captured public attention and imagination coming almost a year after the Ever Given grounded in the Suez Canal on 23 March 2021 blocking the key waterway for six days and causing havoc in global supply chains.