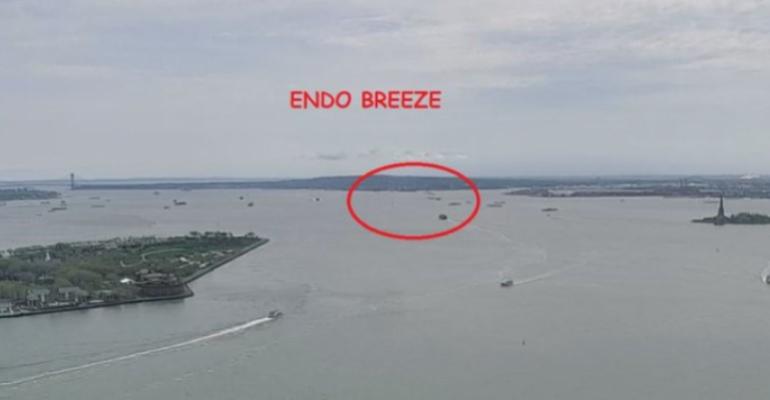 During the very last days of April, there was a fire aboard the tanker Endo Breeze transiting New York harbour’s Raritan Bay.

The vessel had just finished discharging reformate, a blend used to produce motor gasoline, at one of the many terminals in the Arthur Kill, which separates New York and New Jersey.

As detailed on a website organized by followers of the local firefighters, the Endo Breeze, Maltese flag, 47,000 dwt, built-2003, caught fire outbound in Raritan Bay. The vessel was then tied up at buoys within New York waters, and a marine unit of New York City’s fire department (FDNY) responded to the fire.

A report the following day, posted on the site, offered a transcription of fire department radio activity as firefighters were responding to the fire.

“Marine 9, Marine 6, and the Marine Battalion responding to report of boat on fire at sea. Report from Coast Guard is that the boat has a fully involved engine room fire. the tanker is not carrying any product. Tanker is located opposite Keansburg N.J. but in NY water opposite Staten Island. Marine 6 indicated that they believed that the ship activated its internal fire control systems to confine the fire to the engine room. Possibly a CO 2 system.”

Another firefighting enthusiast, posting on the website a few days later, described a combined fire-fighting operation coordinated by the U.S. Coast Guard’s (USCG) team based nearby, added that: “On Friday night [April 29] at 7:42 p.m., we responded to a ship fire in southern Staten Island. It was a 600-foot chemical tanker that had an engine room fire. Our Marine Units responded, boarded the ship and assisted the crew in securing the engine room and making sure the onboard suppression system was working. We then worked to cool the areas around the engine room, utilizing FDNY Marine Company 6,” said #FDNY Battalion Chief Joseph Abbamonte of Marine Operations.

“It was a prolonged operation: we continued to monitor conditions in the engine room for approximately 36 hours. We utilized FDNY resources from our Marine Operations, Hazmat Operations, and Special Operations Command units. The inter-agency coordination between the USCG and the FDNY at this event was paramount to the success of the operation.”

The vessel was later towed to an anchorage area just outside the Verrazanno Bridge, and then to a lay berth in Port Newark, New Jersey.

Speaking a week later at a lunchtime seminar on vessel inspections conducted by the USCG within its “Sector New York” John Hillin, Chief, of the Safety & Security Division of USCG- New York, was asked about the situation aboard Endo Breeze. During his discussion of Fire Safety, which is the leading cause of vessel detentions resulting from USCG Port State Control inspections, he said: “There was a crack on a fuel pipe in the engine room that sprayed on the turbo-charger and started a fire.”

The good news is that measures preventing a further spread of the fire were working; Hillin said: “dampers shut, remote fuel shut off- that all worked, the escape routes worked…the CO2 [used for fire surpression] worked…” adding that: “If the vent dampers had not closed, we might still be dealing with a fire right now.”

Fortunately, there were no injuries and the situation was brought under control. It could have been much worse.

The US Coast Guard has just released its report on Port State Control inspections of non-U.S. vessels. It can be found at: https://www.dco.uscg.mil/Portals/9/DCO%20Documents/5p/CG-5PC/CG-CVC/CVC2/psc/AnnualReports/annualrpt21.pdf