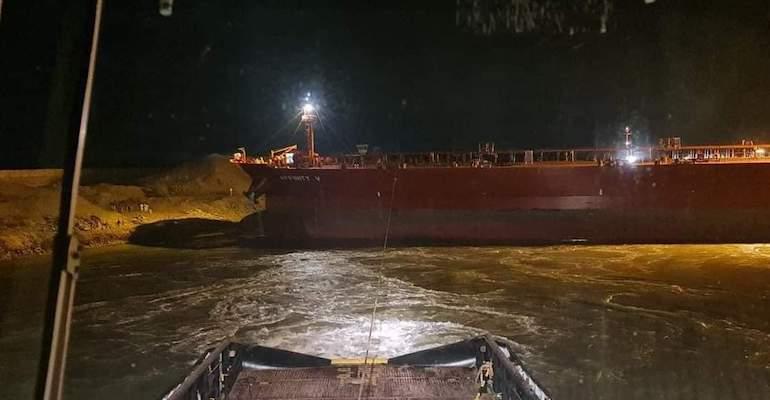 Fears of another Ever Given-style blockage of the Suez Canal were averted yesterday when the Egyptian authorities succeeded in freeing an Aframax crude carrier.

According to news reports, Suez Canal Authority (SCA) tugboats refloated the Singapore-flagged Affinity V, after it was briefly stranded in in a southern section of the waterway late on Wednesday, due to a technical fault with its rudder.

“At around 17:00 UTC today (2022-08-31), the Aframax tanker Affinity V (9645401) seemed to have lost control in the Suez Canal while heading southbound. She temporarily clogged up traffic and is now facing south again, but moving slowly by tugboat assistance,” Tankertrackers.com said yesterday, citing a Marine Traffic report.

By late Thursday, the vessel was reported to be underway in the Gulf of Suez, headed for its destination at the major oil terminal in Yanbu, Saudi Arabia.

An Egyptian source told Seatrade Maritime News earlier this year that the SCA had beefed up towing power in its tugboat fleet to combat such threats, and now had at its disposal a number of 200 ton bollard-pull vessels and above, and was also engaged in widening a troublesome stretch of the southern area of the canal where the Japan-owned and Taiwan-operated Ever Given was grounded for a week in March 2021, throwing global logistics supply lines into chaos.