Container lines running out of ships as transpacific bottleneck intensifies 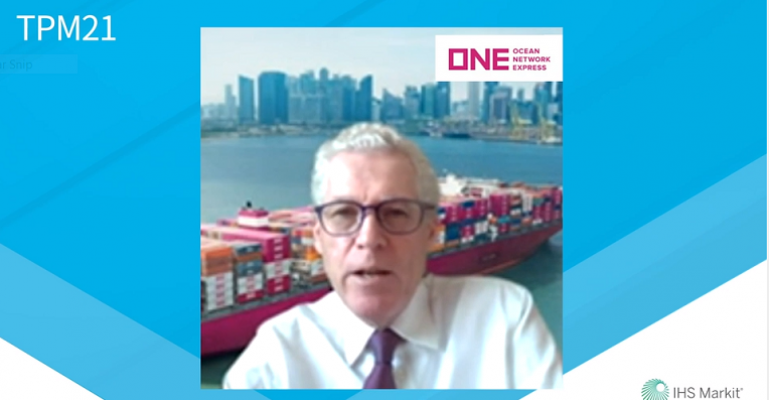 ONE ceo Jeremy Nixon speaking at TPM21
Container lines are running out of ships in Asia as port congestion in the US west coast sees vessels taking 11 days to turnaround at berth, according to Ocean Network Express (ONE) ceo Jeremy Nixon.

A combination of a surge in demand in the second half of last year post Covid-19 lockdowns, larger vessels, lower productivity in US import terminals versus Asian load terminals, and working restrictions coinciding with seasonal holidays has produced a pro-longed bottleneck situation on the transpacific trade.

Speaking at TPM21 Nixon said that by the first week of January there were over 30 vessels at anchor in Los Angeles/Long Beach waiting to berth as the situation hit saturation point, and this number today stands at 41.

Turnaround times in LA/Long Beach for the 13,000 – 14,000 teu capacity vessels now commonly used on the transpacific have increased to from an average of 3 - 5 days to up to 11 days for a loading and discharge cycle, which Nixon described as “very, very significant”.

“We’re actually running out of ships as an industry in Asia, so we’re incurring these “forced slidings” as they’re referred to, which simply says a vessel is scheduled to come in on a particular day at these various ports, but actually the ship hasn’t arrived yet over the horizon,” he explained.

The result has been record low schedule reliability, which according to analysts Sea Intelligence stood at just 34.9% across all trades in January 2020, the sixth month in a row a record low had been recorded.

The situation is unlikely to ease in the near term with factories and terminals in Asia working 24/7, or 168 hours a week, while in the US West Coast container lines are seeing 112 hours a week at the berth, 88 – 90 hours in the container terminal, and the landside working daylight hours.

“When we have week after week and month after month this where the bottleneck builds up,” Nixon stated.

Looking to the landside Nixon noted, “As any terminal operator will tell your when you are full capacity its actually very difficult to manage and overall productivity and efficiency goes [down].”

As to when the current situation would be resolved shippers are going require some patience. “I think we’ve got another three – four months to work this through then hopefully by second half calendar of 2021 we’ll start to see this stabilised,” Nixon stated.