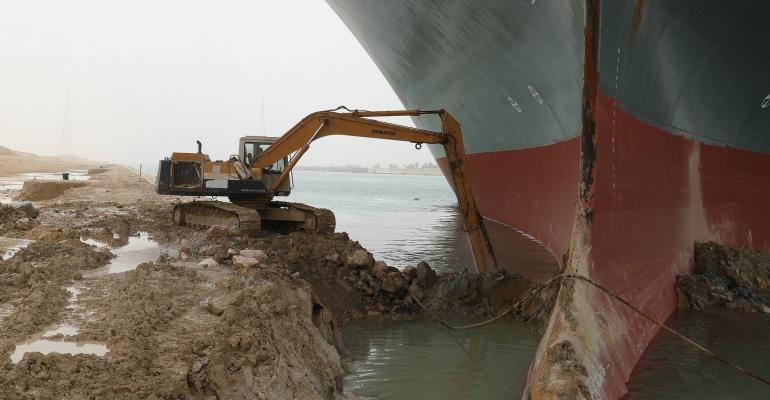 The queue of vessels waiting to transit the blocked Suez Canal grows as efforts to refloat Ever Given continue.

The Suez Canal remains blocked by grounded containership Ever Given. As the canal’s closure enters its fourth day, the number of vessels waiting to transit was 237, according to a Suez Canal Authority (SCA) update at 1200 hrs local time.

While AIS tracking data shows some vessels have changed course to reroute around the canal, the queue of vessels is likely to continue to grow. There were 89 ships at Port Said awaiting a southbound convoy, 41 ships at the Great Bitter lakes waiting to continue their transit and 107 ships at Suez waiting for a northbound convoy, according to the SCA.

Supply chain visibility company Project44 estimated that some 727,764 teu of containership capacity had been impacted by the Suez delays.

Two dredgers from the SCA worked through the night trying to free Ever GIven with eight tugs also on site, said the update. The SCA also expressed its thanks for international offers of assistance in clearing the blockage.

Related: London holds its own in maritime arbitration despite pandemic: LMAA

With around 10% of world trade passing through the Suez Canal each year, and some salvors projecting the blockage to remain in place for weeks, analysts have speculated on the impact on global supply chains.

Claire Grierson, Senior Director of Tanker Research at SSY said that while the impact on the VLCC market had so far been minimal, but it would become more problematic if the Ever Given remains grounded into next week.

"It is having more of an impact on the Suezmax sector where rates are starting to rise and where a lengthy blockage will more quickly affect vessel supply balances. Some vessels in this segment ballast northward through the Suez Canal, after completing voyages in the East, to lift cargoes from the Black Sea or the Mediterranean to go to Asia again, so a sustained canal disruption would have a significant impact on this voyage chain,” said Grierson.

Charterers were already looking at voyage options around the Cape of Good Hope as well as Suez, despite the added 20 days to voyage times. Longer voyages soak up vessel supply and would support rates, Grierson said.

"If the Canal disruption is prolonged, the rerouting of tankers around the Cape of Good Hope will add greatly to voyage times, affecting vessel supply replenishment for some regions and this will boost freight rates at a time when many tanker segments have been struggling. If replacement vessels are needed, this will also cause rates to jump."

SSY said that the impact on LNG trades would be minimal for now, but head of research Derek Langston warned of impacts on other trades.

"The commodity impact extends beyond oil and gas. An array of dry bulk cargoes use the Suez Canal to access key markets in Asia, including grain from the Black Sea and Europe, coal and iron ore from the Black Sea, plus fertilisers from the Baltic Sea.

"To give an idea of scale, SSY estimated more than 40 million tonnes of grain were shipped from the Black Sea alone through the Suez Canal last year to destinations across the Middle East, South and Southeast Asia and East Africa,” said Langston.