Debating the merits of early adoption of smart technology and automation 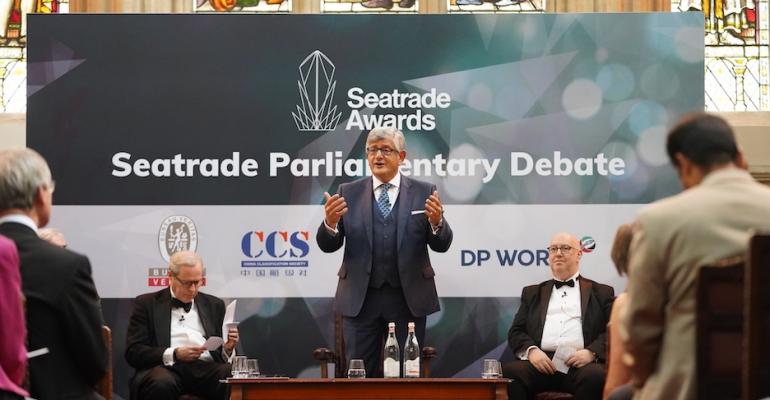 What might we expect from a Seatrade Parliamentary Debate? Before we took our seats, a guest from mainland Europe suggested: “Perhaps it will be like your UK Parliament, with the two sides facing and shouting at each other?”

Fortunately not. The Seatrade debate, held at the Guildhall in London, was far more measured, good-humoured, respectful and – dare I say it – well informed.

The motion: “This house believes that the early adoption of smart technology and automation will be an unqualified benefit for the maritime industry at sea and on land.”

Chairing the debate, Harry Theochari, global head of transport at Norton Rose Fulbright, referred to the financial, environmental and technical challenges faced by the industry and told the audience: “I speak as someone who understands they are a total dinosaur when it comes to disruptive technologies.”

Recently appointed chairman of Maritime UK, he said he had been struck by how little people know or care about the maritime industry – although (B-word alert): “Brexit has got us into the limelight.”

Julian Clark: Decca Records decided to sign the Tremeloes, not the Beatles. Malcom McLean’s concept of containerisation was laughed at. The Internet was predicted to have little impact on everyday life. Clark drew the parallel: shipping cannot afford to ignore AI, blockchain and automation, he said. “Unilever, Alibaba, Maersk and IBM are serious front-runners in our sector. If they feel this is the way forward, I back and support them in that. The future is here, not tomorrow. Embrace it or for ever live in the past.”

Michael Parker: We are not luddites, declared Parker, but just because technical innovation is there doesn’t mean it must all be right. That, he said, was like those who replace their smart phones every five minutes. “Humans use far more subtle means of communication – that means your facial expressions and body language are still steering the communication. People who work in automated systems need to be trained carefully about their limitations.”

To those seeking to apply automation to processes that were once only conducted by humans, he warned: “For every human mistake that is eradicated, the risk is that new ones are being introduced.” He spoke of pilots being driven mad by systems that have a mind of their own, and warned it is all a matter of trust: “Do you trust the technology? Do you trust the people who are choosing it? Do you trust the regulators who approve it?”

John Platsidakis: Declaring himself to be “not a technology person but mostly a policy person”, Platsidakis said that while his generation had seen unprecedented technological advances, the next generation would absorb advancements which today are difficult to imagine. Therefore shipping had to try its best to adopt and make the very best use of what smart technology is available.

However, he said: “There is no substitute for a committed, dedicated and competent crew, so when technology is embraced, the ability of the crew to make the best use of it has to be considered.

“In history we have seen over time that the ones who survive market trends are the ones that come along with technology advancement – from sail to steam to diesel. Shipping can’t afford not to go along with smart technology, subject to the competence of the crews.” John Lloyd: The disparate nature of onboard equipment was highlighted by Lloyd – AIS, radar, ECDIS, and so on, with different suppliers, different systems and issues of reliability and operability between each piece of equipment. He described a college simulator with a suite of perfectly matching, integrated equipment; one supplier, one set of equipment, “not like most bridges in the real world”.

STCW is a great benchmark for training with a vast syllabus, he said, but in a tough, competitive market “apparently the only way we can be competitive is to minimise training”. And it isn’t just college time – experience is also vital, and the pressure is on to minimise the amount of sea service required in training from three years to a mere 12 months, he said. “That is the logic of the madhouse.”

At the last count there were 36 different suppliers of ECDIS, with each version having its own different set of interface buttons “and we wonder whether any have really consulted the mariners involved in casualties”.

“With every piece of so-called technology, we have seen a new opportunity to get the analysis wrong.” The problem would persist, he said, ‘while systems allow humans to operate in a substandard manner”.

Ron Spithout: Early adoption or not, there is not a lot of time to lose, said Spithout. “Technology always takes a leap in adoption after a shipping market slump. And this is the perfect time for adoption.”

We are already seeing rapid and huge increase in the amount of data vessels are using – the rate is doubling per vessel every six months, he said.

“Here we are on the verge of a hyperconnected society and I am sure since the beginning of my speech some of you have ordered your groceries or managed an appointment or checked that delivery of a new car or renewed your insurance. Why would the shipping industry not be part of that movement? There is more money to be made out of shipping due to smarter use of information.”

Paddy Rodgers: Before diving into automation and chasing every idea, it’s important to examine the motivation for change and the consequences of that change, said Rodgers. “The argument is that an automated ship will be safer – because 70-80% of accidents are said to be due to human error. It seems ridiculous that we won’t invest in excellent crews and crew training and procedures and back-ups – why don’t we invest in this sort of thing rather than the automated ship?”

Work gives people purpose and makes life feel worthwhile, he said – warning of the impact of withdrawing work from people in the context of an anxious society where citizens feel impotent and disenfranchised.

Equally: “It may be that the high-value, intellectual jobs are taken out, leaving crew to do boring jobs without engagement or reward. We don’t always get what we want.” In short, he said, we should support human engagement over AI.

Before the audience was asked to walk through the ‘aye’ or ‘no’ lobbies, the six speakers were invited to sum up their cases. Paddy Rodgers took the opportunity to put in a final, emotive plea: “I am only ceo of Euronav for 24 more hours. If you have any conscience, you will allow me to bow out with a vote of confidence.”

That plea didn’t work. The audience voted 59.3% in favour of the motion; 40.7% against. The result was announced at dinner. And no one shouted at anyone.