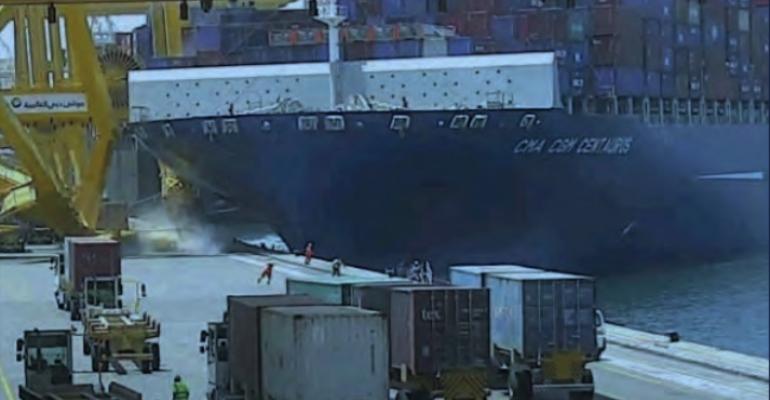 An investigation into the collision between a CMA CGM containership and the berth at Jebel Ali port that left 10 injured has highlighted the lack of communication between the pilot and Master of the vessel and decreasing margins for error as containerships grow ever larger.

On 4 May 2017 the UK-registered, 11,388 teu, containership CMA CGM Centaurus collided with the quay wall at Jebel Ali port in Dubai while under pilotage resulting in the collapse of a quay crane and injuries to 10 shoreside personnel, including one seriously.

The UK's Marine Accident Investigation Board (MAIB) investigation report found that the vessel was going too fast when executing a turn under pilotage during its arrival in port. According to the report the pilot was aware the vessel was going faster than he would have liked, but believed the ship would be able to make the turn, while the bridge team was uncertain of the exact speed at which the manoeuvre could be completed safely, and there was no agreed plan for the manoeuvre.

“Consequently, the pilot was operating in isolation without the support of the bridge team, allowing the pilot’s decision-making to become a single system point of failure,” the report said.

The MAIB highlighted the issue of a lack of communication between pilots and Masters which has also been seen in other incidents.

“Masters and pilots are mostly intelligent, conscientious individuals, so why this cultural divide continues to persist at all is particularly exasperating given the obvious potential consequences of an accident involving such vessels as CMA CGM Centaurus in the environs of a commercial port and the clear recognition on both sides of the divide that a problem exists.

“More effort clearly needs to be made to break down the cultural divide to ensure that mutual cooperation and respect between the bridge team and pilot becomes the norm.”

As well as the working relationship between the pilot and Master the report as drew attention to the growing size of containerships which operate increasingly restricted spaces relative to their size.

“The size of container vessels has grown at a rapid pace, yet ports remain largely the same. The margins for error are therefore decreasing. There have been a number of high profile groundings of large container vessels in the past two years,” the report noted.

The MAIB said this meant, “It is imperative that pilots and ships’ bridge teams work together and implement the best practices of Bridge Resource Management to ensure the safety of both ships and ports.”