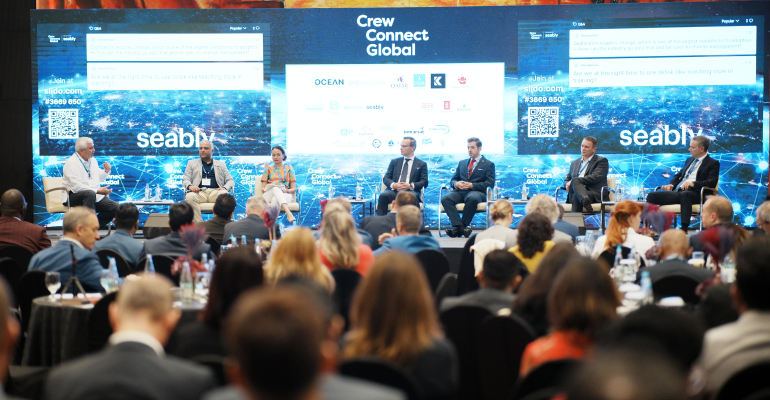 CrewConnect celebrated a record attendance from the international crewing community.

Reuniting the global crewing community for a three-day conference, exhibition and award ceremony, CrewConnect Global made a successful return to the Philippines with its first in-person event since 2019.

More than 600 delegates, VIPs, speakers and exhibitors descended upon the ballroom of the Sofitel Philippine Plaza Manila to discuss the latest critical issues and challenges surrounding crew recruitment and retention, safety at sea and seafarer mental health.

John Adams, Managing Director and V.Ships UK Limited , Chairman at Bahamas Shipowners’ Association and Vice-Chair at International Chamber of Shipping opened proceedings and chaired discussions throughout. Adams commented: “This conference has always provided a vital forum to stimulate discussion, innovation and critical thinking. It’s been really great to see so many people back together face to face and the frequency and quality of conversations I’ve heard around the event suggests to me that some significant progress has been made on key issues.”

John Adams continued: “We’ve heard from all corners of the crewing stakeholder landscape throughout the last three days and tackled some key issues such as digitalisation, health and wellbeing and important updates from the Just Transition Task Force and more.”

The conference programme addressed different topics across the three days: day one focused on big-picture issues and government updates; day two on recruitment, retention and seafarer welfare; and day three considered the future of safety and training.

The potential shortage of seafarers loomed large over the opening discussions with Guy Platten, Secretary General of the International Chamber of Shipping, pointing to a shortage of 96,000 officers by 2026 according to an ICS/BIMCO survey. In the Crew Supply Forum top executives from the Philippines highlighted the lack of cadet berths.

As the world’s largest supplier of seafarers Jaime Jimenez Bautista, Secretary of the Philippines Department of Transportation, pledged that the government was committed to rectifying the deficiencies found both in the March 2020 European Maritime Safety Agency (EMSA) audit and a recent Independent Evaluation by the IMO for International Convention on Standards of Training and Certification (STCW) ‘white-list’.

Discussions around recruitment and retention saw a focus on seafarers signing off on their contracts on time and the importance of providing connectivity especially for the next generation of seafarers who have not known lives without their smartphones.

The CrewConnect Global Awards brought the 3-day event to a glittering close with the winners revealed at a gala dinner and networking evening.

Speaking as the event closed, Seatrade Maritime group director, Chris Morley, stated: “I’m absolutely delighted that so many customers are happy with the event. After a three-year break since the last in-person show, the sense of reunion among delegates was substantial. But it was equally pleasing to see so many new faces in the audience and appreciate first-hand the many plans being developed across the sector. And I’d like to acknowledge John’s ‘tour de force’ as Chair of these Manila events over the years, and his contribution in establishing the event as an international flagship conference. We are committed to carrying on his legacy and I’m already looking forward to 2023!”

CrewConnect Global will return to Manila at a similar time next year.