Dismissal of LNG as a marine fuel ‘unfair and unfounded’ 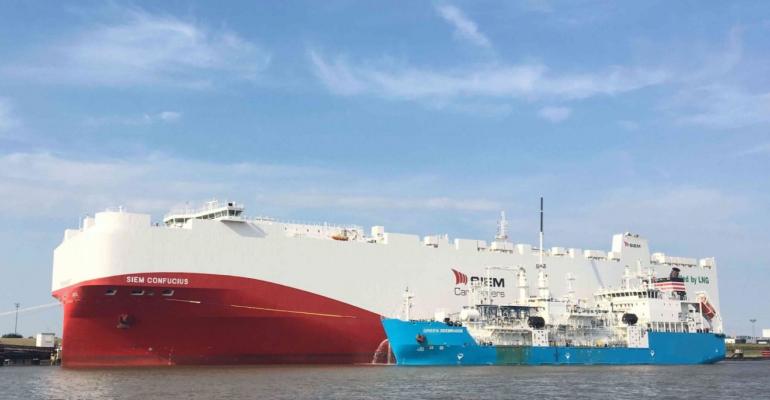 “I think it’s unfair and unfounded that LNG is currently dismissed by some people with limited or no experience with LNG,” said Schaap. “That’s as political as I’m going to get.”

Questions were raised recently over LNG’s suitability as a future marine fuel by a World Bank report which cast doubt on LNG’s green credentials. The report covered issues like methane slip and the longer-term viability of infrastructure. LNG lobby groups have disputed the report’s methodology and findings, pointing to differences between the World Bank report and other reports on LNG as a marine fuel, particularly on figures around methane slip and lifetime global warming potential of methane.

The recent debate has focused on greenhouse gas (GHG) emissions, said Schaap, overlooking one key benefit of LNG—the fuel’s much lower emissions of nitrogen oxides, and near-zero emissions of sulphur oxides and particulate matter. Those benefits have been brought into focus in Titan LNG’s home in the Netherlands; poor air quality in and around port and industrial zones have made headlines and caught the public’s attention, he said, especially due to links between air quality and premature deaths.

The combination of air quality improvement and lower well-to-wake CO2 emissions from LNG makes the fuel a viable improvement over heavy fuel oil, said Schaap, adding: “LNG is already a step forward in the right direction. ‘Do something now’ is one of the messages we try to send to the world.”

Schaap split shipping’s decarbonisation future into two eras, the “endgame” of zero emissions and the “middle game” where industries test and deploy lower carbon technologies on their way to zero carbon emissions.

BioLNG holds great potential both in the medium and in the long-term, said Schaap. Garbage and waste streams can be turned into various outputs, including gas, which can be liquefied into LNG.

“If you look into second generation liquid fuels, they may not be the answer to utilise some of the residual waste streams. In that respect we think BioLNG could play a prominent role for the decarbonisation of the shipping industry,” he said.

BioLNG production is currently smaller scale and therefore more expensive, but savings could be made by upscaling production. Such expansion would be accelerated by understanding and co-operation between gas producers, distributors, shipowners and vessel end-users like charterers, who may need to be willing to pay more for greener fuels, said Schaap.

Feedstocks of waste will have a price tag which will affect the price of BioLNG and other biofuels. The shipping industry will need to decide how much it is willing to pay for its fuel as competition with other industries for greener fuels increases. Furthermore, the evolution of international rules and regulations—such as IMO, EU-ETS—will further spur price rises in other, more carbon-emitting fuels, thereby making BioLNG more attractive. Shipping has enjoyed a discount for a long time, said Schaap, by burning fuels that other sectors either choose not to use or cannot use.

As BioLNG and LNG are chemically identical, the greener BioLNG can be gradually added into the mix as production ramps up without taking any extra measures, Schaap Said. This is different to blending fuels like biodiesel into diesel for example, where chemical differences between the oil-based and biofuel may affect engine performance.

LNG’s interchangeability brings further advantages in the future, said Schaap, as existing infrastructure for LNG distribution and bunkering is already in place and being used, and can continue to be used with BioLNG.

Much of the recent discussion over LNG’s future as a marine fuel has focused on the potential of zero carbon hydrogen-based fuels in the endgame.

LNG’s own endgame solution is synthetic LNG, created by the combination of hydrogen and carbon. The need to create large volumes of hydrogen in a sustainable manner is a requirement synthetic LNG shares with competing future fuels like green ammonia.

“First we need to get the hydrogen. These are massive, capital-intensive projects. There should be a pool and a long-term commitment to make it happen,” said Schaap.

Synthetic LNG is more energy dense than fuels like green ammonia, enabling ships to have smaller bunker tanks and freeing up space for cargo. Synthetic LNG is again chemically the same as LNG and as BioLNG, making existing engines and infrastructure viable over a much longer term, said Schaaps.

One criticism of LNG as a future fuel is that it contains carbon, unlike ammonia which does not, and so burning LNG of any type creates carbon dioxide; the vision for synthetic LNG is for onboard carbon capture technology to recover carbon. Captured carbon would be delivered back to shore where it can be used to create synthetic LNG: a closed carbon loop.

Schaap said that Titan LNG was investing in expansion of its own LNG bunkering fleet to feed a growing demand for the fuel, and Titan LNG was getting more and more approaches from companies looking to use LNG and lean on Titan LNG’s expertise and services.

“We see some charters making a very clear decision to take LNG-powered tonnage, we see that very clearly in the tanker segment.” As owners and charterers gain more experience with LNG-fuelled ships, they become more willing and confident to use LNG, he said.

As the technology and practices around LNG have proven themselves and risk has been reduced, financiers are also much more confident in backing LNG-related projects and tonnage.

Reinforcing his point on the need to act now, Schaap said: “At this point in time, who would finance a heavy fuel oil-powered vessel? I myself wouldn’t invest a single cent in it.”

Crowley and Shell to Build and Charter Largest US LNG Bunker Barge
Sep 02, 2021