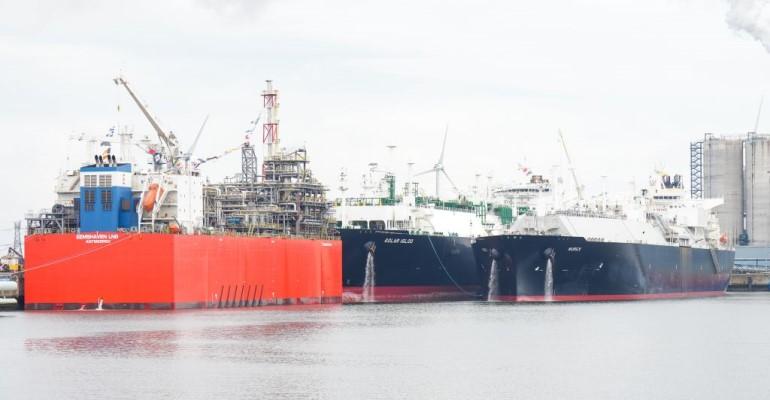 Seven more floating storage regasification units (FSRUs) are likely to be deployed in north-west Europe by the end of next year taking the total to 11 units.

FSRUs that were either inactive or trading as LNG carriers have been fixed on rates that are believed to have doubled in recent weeks, according to Clarkson Research. The scramble for units comes as LNG takes a central role in meeting European energy shortages. Russian LNG via pipeline has been replaced by imports from a range of suppliers by sea. Exports from the US, in particular, have risen sharply this year – the country is now the world’s largest LNG exporter.

FSRUs are the quickest and cheapest means of ramping up urgently needed import capacity. By the end of next year, Clarkson have revealed, the world FSRU fleet will total 53 units comprising newbuildings and conversions. By then, only one FSRU is likely to be inactive, although this could well be snapped up long before then. Scope to build new FSRUs is limited because new production capacity in countries including Qatar, Australia and the US, has led to a record 141 new LNG carrier contracts so far this year, Clarkson figures show.

The world’s seven specialist LNG builders are practically full until 2027 and there is little scope for additional building capacity between now and then. Other shipbuilders lack the resources necessary for LNG carrier construction and, in any case, have plenty of other work in hand.

Likely additional demand for FSRUs in the short term, therefore, is likely to be met by conversions of older LNG carriers. According to experts, more than half of the existing LNG fleet is likely to fare badly in carbon intensity indicator (CII) assessments. There are more than 240 LNG carriers powered by energy-hungry steam turbines and a significant number of older vessels that do not have boil-off management systems and therefore cannot use LNG as fuel. Many of these ships will fall into CII categories, D and E, the experts predict.