Photo: Taken from video on Salvage and Wreck Instrgram 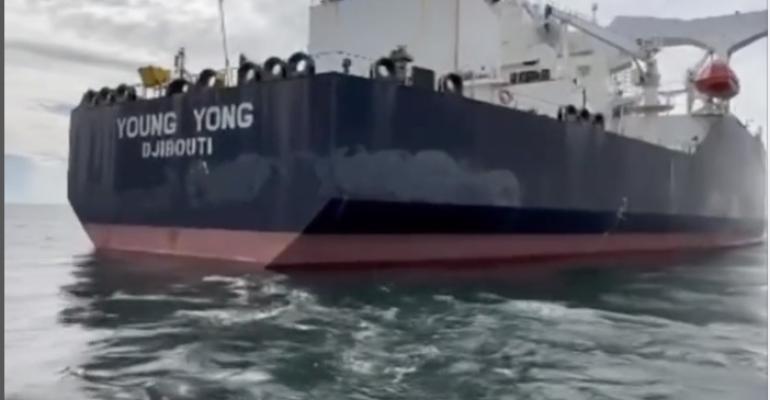 Columnist Michael Grey explores the impact the sanction-busting dark tanker fleet could have on the sector’s safety reputation.

If you are looking for ship operating excellence, it would be very hard to deny the tanker sector the top spot. Indeed, for several decades, tanker operators, driven perhaps by the ignorant public perception of their business, have been energetically building their reputation as the best maintained, best operated, best policed and most assiduously regulated sector bar none.

They have worked hard to earn this crown. Think of the ever-improving OCIMF inspection regime, the decline in the quantity of spilt oil and pollution incidents involving tankers and the excellent record of the sector in featuring in port state control issues. In short, it is something of which most tanker operators, along with those who sail in their ships, can be proud.

But there is something quite nasty appearing on the tanker berth, in which sharp practice, unscrupulous players and creeping mistrust combine to cast a shadow over this maritime excellence and which threatens both marine safety and the environment. Involving three notably autocratic regimes in Venezuela, Iran and Russia, with the collusion of those who see lucrative opportunities to facilitate the passage of sanctioned oil, a sizable portion of the VLCC fleet is now operating in the shadows.

There are certain common factors in the tonnage, which might be described as being in the autumn of its lives, kept from the recycling shears by the availability of sanctioned cargoes. Increasingly these ships are operating under flags with no reputation or experience in regulating ships of this size and almost certainly under a minimum maintenance regime.

Although IMO identity numbers are supposed to be unchanged from a ship’s “cradle to grave”, their names, ports of registry and ownership are altered with alacrity, often during a trading voyage. Their classification status, the comprehensiveness of their insurance provision (and that of their cargo) is as amorphous as their ownership, which for the most part is hidden and largely untraceable. Particularly worrying is the way that the vessels attempt to conceal themselves by switching off their electronic identity systems, and transmitting spurious information about their voyage.

Increasingly systematic has become the practice of using ship to ship transfers to switch sanctioned cargoes between vessels (itself not an evolution for the faint hearted) with some evidence that fraudulent bills of lading and other documents are being employed.

Common sense and long experience suggest that ships running in such a fashion will be unlikely to maintain any pretence at operational quality over time and this perhaps is something that the more respectable elements in world shipping should be worried about. Something of a pointer to this downward trend might have been signalled by the grounding last month in the Singapore Straits of an elderly, fully laden VLCC. After several worrying days the ship was refloated, but the consequences of such a ship breaking up in such waters did not take a great deal of imagination, especially when the antecedents of the vessel and its cargo were revealed.

Nobody can be surprised that the three sanctioned regimes are willing to employ every ruse available to get their revenue earning cargoes to their buyers. Their efforts are facilitated by their use of the “ungoverned spaces” outside territorial waters, by louche and unreformed systems of ship registry and ownership and, as always, the opportunity for the unscrupulous to make a lot of money.

Should the quality tanker sector, and even the shipping industry in general, be concerned about this shadowy stain on maritime trade? Here again we perhaps ought to think about perception and the way in which any incidents involving pollution will be regarded in the minds of the public or media, few of which will be able to discriminate between units of the mainstream quality fleet, and this shadowy sector. We shouldn’t have to put up with a laden “dark” VLCC, broken-backed on a shoal in tidal waters, to focus minds on what this might do to maritime reputations.