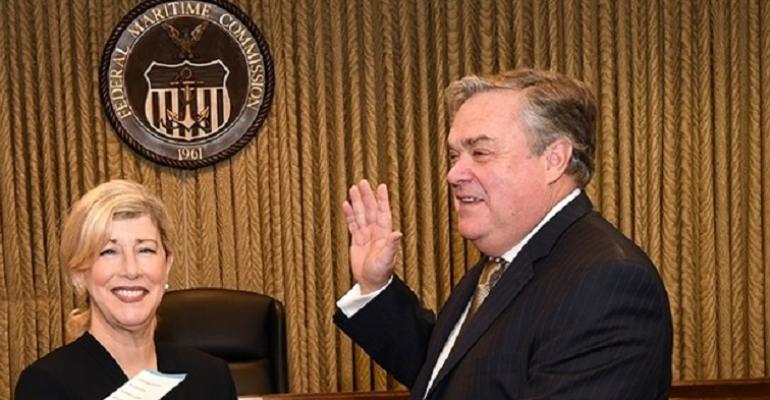 With maritime supply chain disruptions increasingly featuring in the news, whether in the Suez Canal, or in San Pedro Bay, California, the anchorage for Los Angeles and Long Beach, a webinar featuring Carl Bentzel, Commissioner at the US Federal Maritime Commission (FMC), was timely to say the least.

In a wide ranging conversation moderated by  Shipping and Freight Resource founder Hariesh Manaadiar, Commissioner Bentzel, partly through a five year term that began in 2019, discussed “Detention and Demurrage and Port Operations” along with many related concerns facing the liner shipping community for which the FMC provides regulatory oversight and resolution of disputes and complaints through assigning penalties. And lately, the FMC has been busier than normal.

Early into the hour-long webinar, the Commissioner opined that: “You have to look at the context of demurrage and detention, and the reality of the marketplace…the implementation of penalties and fines…are a function of whether or not the operational management of our port and intermodal shipping industry is working.”

He said that penalties that might be assessed by the FMC need to take these port operations into careful consideration. He acknowledged that: “We had some challenges along the way in trying to assign liabilities of the parties”, and said that demurrage and detention (called “D and D”) can alternatively serve the interests of the carriers or the cargo shippers.

On the subject of a possibly permanent shifts in the marketplace to e-commerce post-Covid 19 and the “challenges” of such shifts, Bentzel described a US port business that was battered in Spring 2020, with intermodal traffic reduced by 20% - 30%, that had shifted, by summer 2020, to one where cargo had increased by a similar amount.

“From the beginning, we found that we were short on intermodal chassis…so even though cargo was getting to the ports and terminals, we weren’t able to get them through the terminals and into the intermodal system.” Citing numbers of vessels anchored at LA - LB, and then further up the coast at Oakland, he described a situation that is easing slightly on the terminal side, aided by longshoremen getting vaccinated, but now seeing backups at rail terminals.

Summing up the present challenges facing US supply chains from vessels waiting and subsequent cancelled port calls, so vessels can return to Asia, he said: “We’re seeing economic disruptions starting in the United States…it builds, it builds in multiple areas.”

Commissioner Bentzel did talk about a greater number of events “outside the control of the shipping public, and force majeure events”, as reasons for the increased activity at the FMC. The ill-fated Ever Given was not an explicit topic of the interview, but Bentzel did say: “The size of containerships is so massive now - it’s becoming increasingly challenging on the shore to orchestrate intermodal services.”

He said: “There’s a fundamental shift towards utilisation of maritime assets,” and cited, “a need to evaluate what’s going on, especially in these larger port complexes.”