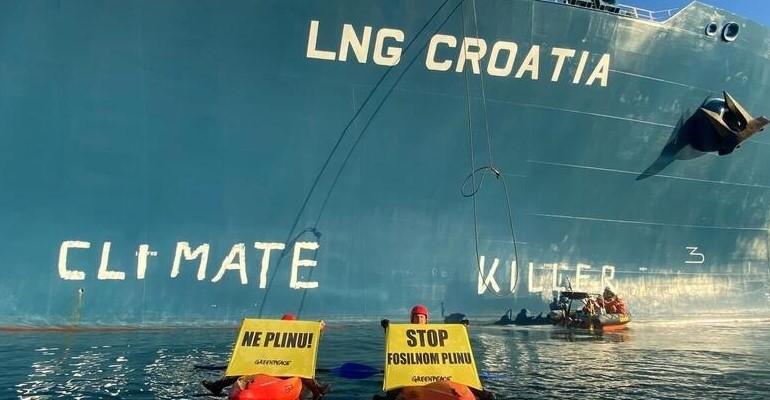 Greenpeace CEE activists painted “CLIMATE KILLER!" across the side of LNG Croatia.
As many thousands of people descend on Scotland’s second largest city, Glasgow, for what many believe to be the most important climate summit since the Paris Agreement was struck in 2015, climate protesters have been making their voices heard in various ways.

In the UK, for example, activists associated with Insulate Britain – an offshoot of Climate Rebellion – have been disrupting some of the country’s key highways for weeks, including the M25 and the M40, by gluing themselves to road surfaces.

Greenpeace, meanwhile, has had a go at LNG, a relatively clean source of hydrocarbon energy with significant potential for cutting carbon emissions from other conventional fuels, including oil and coal. It also has scope to include non-fossil LNG and, depending on production, could become low- or zero-carbon in the future.

Related: Decarbonisation and shipping - setting the stage for COP26

On October 18, Greenpeace activists painted ‘Climate Killer’ on the hull of the newly arrived Croatia FSRU on the island of Krk in Croatia. The group’s campaigners explained that their action was designed to highlight the climate threat of gas. However, the floating plant, funded in part by the European Union, is another step in Croatia’s decarbonisation drive.

Then, on Wednesday this week, the 1984-built, diesel-engined Esperanza, a Greenpeace vessel, was used to prevent the 138,517 m3 LNG carrier, Merchant, from docking and discharging at the Enagas Sagunto terminal in Spain. The 2003-built vessel, owned by South Korea’s Sinokor Merchant Marine, was carrying a cargo of what was claimed to be fracked gas loaded at Cheniere’s Sabine Pass LNG terminal in Texas.

The blockade, which delayed the LNG carrier by about 12 hours, was brought to an end when the Valencia Port Authority called on the country’s Civil Guard to intervene. By Thursday morning, the vessel had discharged her cargo, was back at sea in the western Mediterranean making about 18 knots, and bound once again for the Sabine Pass terminal, according to ship tracking data.

Most people believe that the world’s climate is now a critical emergency, and this will doubtless be reaffirmed many times over the days ahead in Glasgow. However, energy experts point out that in the short- to medium term, there is no alternative energy source available at sufficient scale.

The priority, they say, must be the decarbonisation of oil and gas production, the use of technologies such as carbon capture and storage, continuing renewables development, and R&D relating to carbon-free sources of power including hydrogen and nuclear.