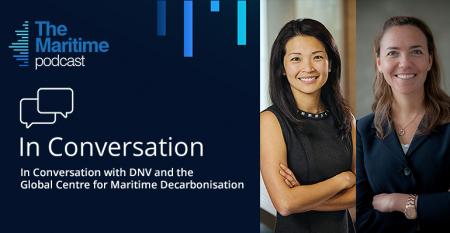 Podcast: In Conversation with DNV and the Global Centre for Maritime Decarbonisation
Nov 25, 2021
This latest episode of The Maritime Podcast focuses on shipping’s pathway to zero carbon emissions and the role played by the new Global...

‘Collaboration is the fuel of the future’: DNV
Oct 14, 2021
Classification society DNV has urged shipping to throw its weight behind the ICS bunker fuel levy proposal for R...

Hybrid audit and inspection will be 'new normal'
Jun 30, 2021
The future of maritime audits and inspections will include a hybrid blend of remote digital verification and on-site verifications, according to classification society DNV.

DNV issues AIP for AYRO’s wingsail propulsion system
Feb 16, 2021
French company AYRO has been awarded an approval-in-principle (AIP) for its wind-assisted propulsion system for ships from...

DNV GL seeks feedback on draft rule set
Jul 01, 2015
DNV GL has handed out its new rule set, comprised of the two rule sets brought together by the merger of DNV and GL, to 800 customers and stakeholders as part of an external hearing process.

DNVPS seeks to offer higher value services as it rebrands
Feb 17, 2014
Global fuel testing services firm DNV Petroleum Services (DNVPS) is seeking to offer more value-added services as it is set to undertake major rebranding exercise that will see it have a new name and logo by the middle of this year.