Closing the gap between AI capability and domain knowledge in maritime 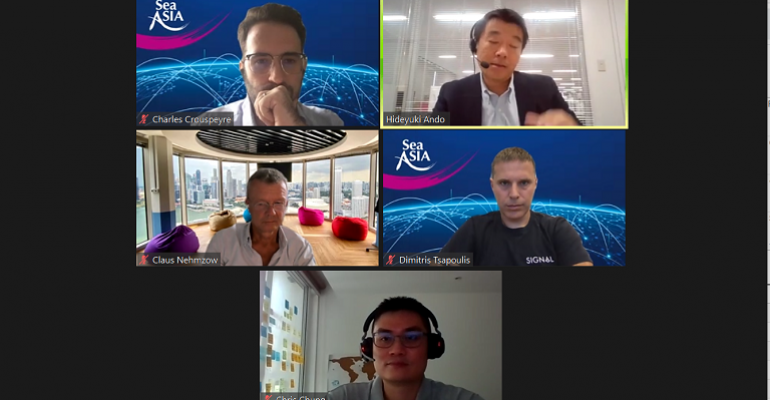 Closing the gap between the capability of AI tools and working with those with the business domain knowledge in maritime was in focus at a Sea Asia virtual conference session on Wednesday.

Hideyuki Ando, Director MTI for NYK Group, explained that they were able to gather data and had the tools to analyse, it but the question then was what to do with the results.

“We have to identify the right issues to solve, there is plenty of data, and there are plenty of tools, but still it is matching the business and operational business issues with those data. That chemistry is still a little bit missing,” Ando said during the Harnessing AI for Shipping panel, part of the Maritime Online Series.

However, he believes this gap is beginning to close with ship engineers starting to see the potential opportunity for improved operations using data. “Data scientists are starting to understand the business domain so they are proposing more tangible solutions to their business domain people. I think those gaps are closing,” he explained.

Chris Chung, Director Ecosytem Development and Strategic Projects for Wartsila believes the last 18 months of the pandemic has accelerated the closing of this gap. For example the difficulty getting field engineers onboard vessels has driven an acceptance remote connectivity whereas previously there was requirement to get people onboard regardless of remote capabilities.

“I think from the AI perspective the sensors are there, we deployed a lot sensors the connectivity is getting better and better, now it’s really about the domain knowledge coming together with the data team, solving real world problems,” Chung explained.

Whereas there is often a fear around AI replacing humans Chung believes it allows people to focus on the skills they are good at.

“Especially for our machine health predictive maintenance it’s really a good collaboration between the IOT capability, getting the right data, at the right time and the right frequency, getting the AI to understand the read signals and flags some of the anomalies, and actually coupling that with the domain knowledge.

“I think this where AI does magic because it is really enabling things it’s nearly impossible for a human to do, and vice versa the human actually gets to concentrate on the expertise that is high intelligence and high value adding.”

Claus Nehmzhow, Chief Innovation Office of Eastern Pacific Shipping, highlighted the need for the high volume of data for AI to be effective using examples from start-ups in its tech maritime accelerator. “One of them is using high frequency data analysis from the engines and generators and so forth and the more we install it on our ships, the more data we get so the models can better.”

Dimitris Tsapoulis, Chief Operating Officer for Signal Group, which analyses commercial rather than operational data said issues remained around the sharing of data.

“Still data in shipping flows over interests, there all sort of strange commercial situations or lack of commercially available data. Things like ESG and all of us coming together to protect the environment has indicated we may get some data sets to do some collective work,” he said.

“If you think about AI in its current form it’s so dependent on available data, volume of data and quality of data, and that’s not the case in shipping. That raises the bar you need to have higher quality science to treat the data to make sure you are not putting garbage in, and getting garbage out.”

Looking ahead Nehmzhow believes it is important for AI to be an accepted part of operations and no longer seen as something special.

“I think one of things we will see is people will no longer talk about AI as a special separate thing, hopefully it will become so ubiquitous, just as very powerful and further increasing capability that will just power a lot of things. Similar we don’t talk about the database anymore I think increasingly it will be integrated and become ubiquitous. I think will be a sign that it will final have arrived.

Sponsored Content
Adapting to A New Generation of Emissions Regulations
May 13, 2022