The complexities of scrubber retrofit finance 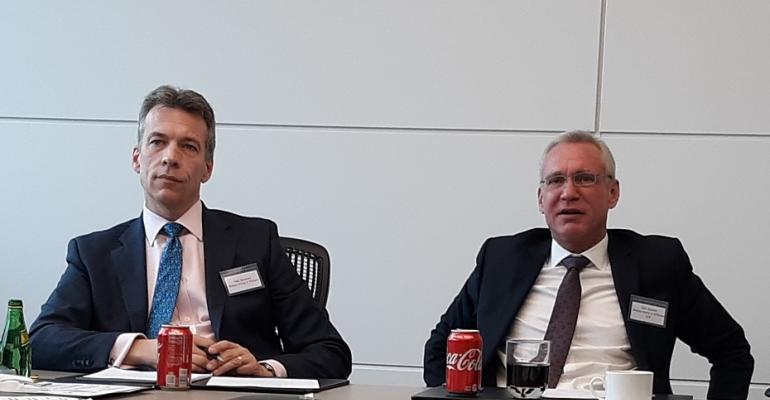 Installation is not the only challenge when it comes to retrofitting a scrubber on an existing vessel, there is also financing where devil is in the details according to lawyers Watson Farley & Williams (WFW).

A roundtable discussion at the firm’s New York offices on the “enforcement issues for scrubber financing” delved into these details. The meeting was chaired by WFW New York’s Partner Daniel Rodgers, who specializes in vessel finance, joined by colleagues John Kissane, Neil Quartaro and Celinda Metro- who specialize in enforcement matters.

In their introduction, the lawyers acknowledged many uncertainties surrounding scrubbers and “the science on it is not great” Kissane said, when asked about open loop scrubbers. Quartaro reminded the audience that scrubbers bring considerable economic uncertainties, as well.

For a credit-worthy owner’s newbuild, the scrubber is an integral part of the vessel, and does not present a particular financing challenge. Several financing scenarios were presented concerning vessels already trading. Quickly dismissed was the situation where an owner installs a scrubber on an unencumbered and, therefore, likely an older vessel. The investment could probably not be justified, given the reduced remaining trading life.

Much of the lunchtime discussion concerned permutations of relatively young vessels that are “encumbered”, that is part of a security package collateralizing ship mortgages. The straightest track forward emerges when an existing lender, already holding a first mortgage, might extend additional credit to the borrower to pay for the new equipment.

When an arrangement with a different financier a second mortgage, a finance lease, or a yard credit- is contemplated, the WFW team advised their audience to tread very cautiously. To quote Quartaro, “There are going to be priority fights,” and secondary lenders need to be discussing “stringent intercreditor agreements.”

Read more: Availability of finance for consolidation and 'green' retrofits

Quartaro suggested that a retrofitted scrubber is likely to be considered an “appurtenance” affixed to a vessel and therefore covered under a first mortgage. But he was quick to stress that this notion has not been tested under battle conditions, i.e. not litigated yet. Another scenario would be a scrubber vendor offering a “finance lease” of the new kit, or a shipyard installing the equipment then selling its receivable to a finance company.

As explained by the WFW team in US bankruptcy courts, applying Uniform Commercial Code, if a shipowner files for bankruptcy (likely in the US jurisdiction) a finance lease would be characterized as a sale- meaning that the scrubber belongs to the owner. The scrubber would be characterized as a “necessary” under US maritime law giving rise to maritime lien, and the secondary financier would drift further back in the repayment line.

Rodgers also described “soft defaults” that could occur if an owner installs a material piece of equipment without informing the primary lender. As the discussion then turned to possible fines and detentions resulting from non-compliant fuels being burned, charterers’ liens (where they share in fuel cost savings) and to unlikely assertions of “unseaworthiness” for vessels without scrubbers it became clear that such discussions will be continuing in the ramp up to IMO 2020.