HomeMaritime NewsRegionsAmericasPlatform pirates and unicorns – the end of shipping as we know it?
Recent
Geographies
Recent News
UK marks World Maritime Day with £60m in green maritime funding
Sep 29, 2022
You cannot manage what you cannot measure – how data helps ports and terminals breathe easier
Sep 29, 2022
Tankers ‘set up for a very good bull run’
Sep 28, 2022
Saudi Arabia ‘could have its own Belt and Road Initiative’
Sep 28, 2022
Trending Now
Container spot rates tumble another 9.7% in last week
Sep 16, 2022
Panama Canal waters overflow on the west lane of the Gatun Locks
Sep 14, 2022
Container spot rates plunge 58% since January
Sep 23, 2022
A bridge over the Malacca Straits?
Sep 12, 2022
Live From Nor-Shipping 2019
brought to you by

Platform pirates and unicorns – the end of shipping as we know it? 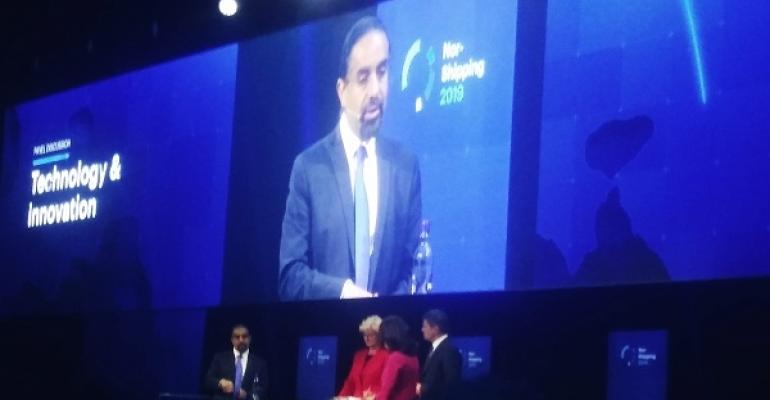 The opening conference at Nor-Shipping sought to try and illuminate the disruption that shipping faces with opinions from both industry and non-industry voices. For the generally very practically minded shipping executive the presentations took us on a voyage to platform pirates and unicorns.

Economist Paul Romer, winner of Nobel Memorial Prize in Economic Sciences 2018, covered a vast amount of ground relating to governments, the dynamics of global trade and the power of big business.

In terms of a particular threat to shipping Romer focused on what he termed “platform pirates” that manage wield vast global power across particular industry sectors, with the example for shipping and forwarding being digital freight forwarding platform Flexport. “You should think how to protect yourself from the platform pirates as governments will not do it for you,” he warned.

Vast global digital enterprises are able to undercut governance, much as cigarette manufacturers did in the past despite the known health risks of their products.

Romer cited a need for inter-operability of systems to stop one company have a monopoly. A successful example of this was seen as being the inter-operable stands computing and tech cables.

Futurist Ramez Naam, an Adjunct Professor at Singularity University, moved in to the style of tech evangelist with his presentation, and although little of the content was particularly new or revelatory its delivery seemed to strike a chord with audience members we talked to afterwards. Describing a world of autonomous electric taxis, solar and wind power becoming economic replacements for fossil fuels, a vast take up of 3D printing, and a threat from unicorn tech companies, there was very little to bring cheer to the shipping executive.

Andersen said, “Remember the shipping is already dealing with disruption, it’s subject to a very cyclical demand, it’s very risky business it has managed to adapt to. But it has to really absorb digital technologies at a much higher speed as that is the only way to remain competitive and get the productivity gains you need and address environmental problems that hit this industry.”

The domain knowledge and complexities of shipping and offshore could make these industries harder to disrupt by an outside force Andersen believes. “In our domain we have complex business and the value I can see is not see easy to get, we really want to solve the problem we are trying to solve.

“You have to inject that new technology in solving really complex problems.”

Kristoffersen, who’s company Klavness has been acknowledged for its digital leadership in shipping said, “I don’t really like this disruption thing, it sounds like something that comes to you and kills you. This is a transition we are on. Disruption you can’t do anything about, transition you manage.”

In terms of what Klavness is doing and where Kristoffersen sees technology playing a part he said: “In our company, and our strategy we believe there are two factors that will create new value. One is the transition of energy – the short term energy efficiency and in the long term climate neutral. And obviously on how you use technology to solve new problems and that’s really where we focus on transforming our company.”

Can shipping companies use technology to solve their own problems or be disrupted by outside technology forces? Only time will tell which turns out to be the case.