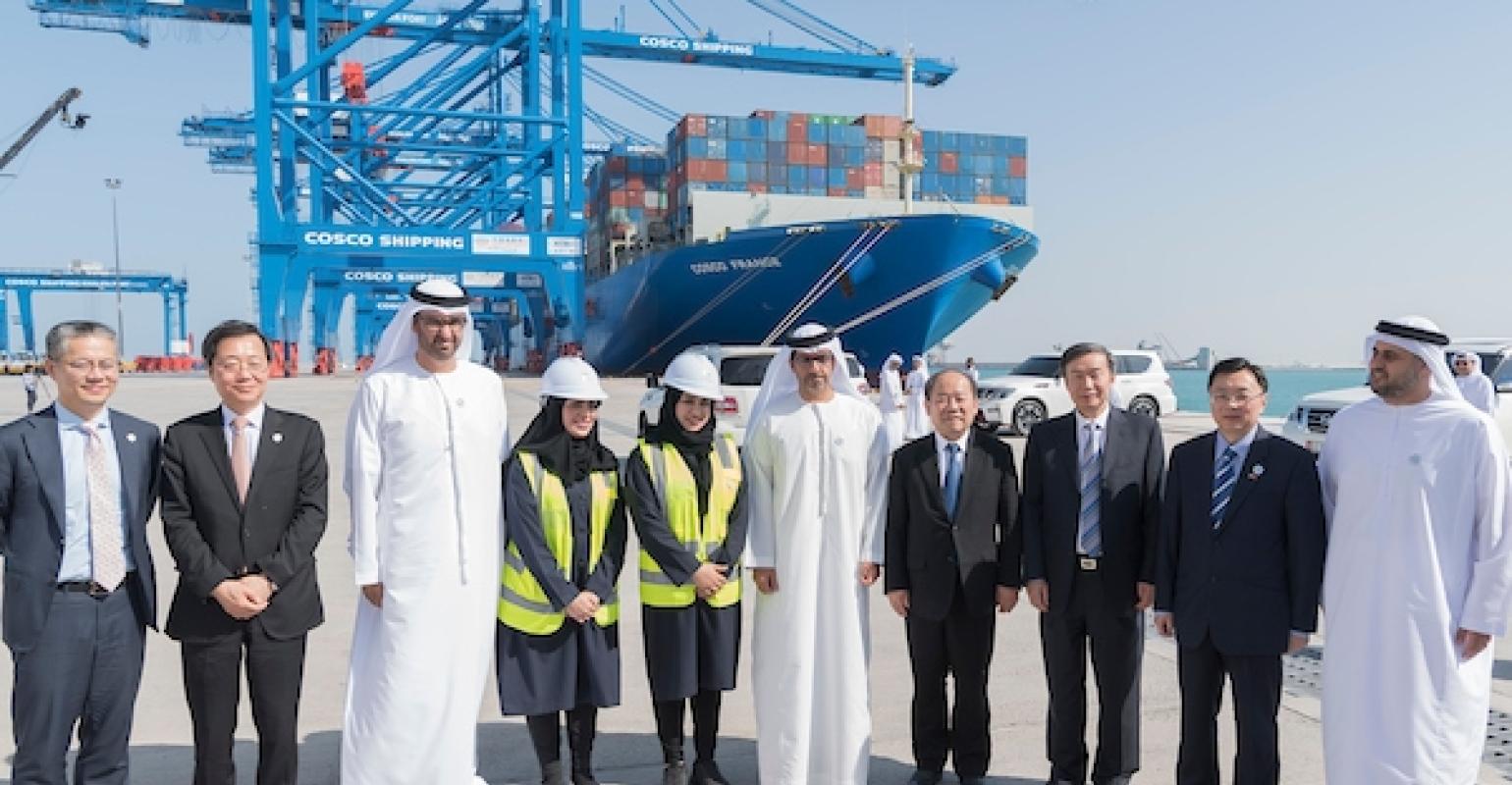 The CSP Abu Dhabi Terminal has a design capacity of 2.5m teu and will open with a handling capacity of 1.5m teu and 1,200 metres of quay. The water depth of the terminal is 16.5 metres, which means it can accommodate mega-vessels up to 20,000 teu.

The deepwater, semi-automated container terminal includes the largest Container Freight Station in the Middle East, covering 275,000 sq me. The facility offers facilities for full and partial bonded container shipments, the full range of container packing services, short-term warehousing for de-consolidated cargo as well as connectivity with the other container terminal at Khalifa Port.

The inauguration on 10 December was attended by a number of UAE government ministers, demonstrating the importance of the project and the flourishing relationship with China to Abu Dhabi. The CSP Abu Dhabi Terminal is the first overseas greenfield project controlled by Cosco Shipping Ports. The 35-year concession agreement for the terminal, also known Terminal 2, was signed in September 2016, and includes the option for a further 600 metre of quay length in the future to allow for anticipated volume growth, and capacity to increase to 3.5m teu.

“The decision by Cosco Shipping Ports to invest in Abu Dhabi is a testament to our strategic location, attractive business environment and supportive regulation,” said Sheikh Theyab bin Mohamed bin Zayed Al Nahyan, chairman of Abu Dhabi’s Department of Transport. “We believe that it will open the door to more foreign direct investment in the Emirate.”

Ning Jizhe, deputy director of China’s National Development and Reform Commission, commented: “The inauguration ceremony is not only a milestone in the cooperation of China’s Belt and Road Initiative, but also a good start for China and UAE’s pragmatic cooperation in other key areas. The two countries’ strong determination for cooperation laid a solid foundation for development and deepening of mutual relations, and thus provided promising prospects for cooperation in the future. Under the strategic leadership, China and UAE will continue to cooperate in more flagship projects and jointly contribute to the Belt and Road Initiative.”

The partnership with Cosco Shipping Ports is part of a five-year strategy by Abu Dhabi Ports aimed at strengthening the maritime sector in the emirate and driving economic diversification by increasing regional trade and attracting foreign direct investment. Abu Dhabi Ports is planning $2.7bn of investment to increase the capacity at Khalifa Port from the current 5m teu to 9.1m teu, including boosting capacity at Terminal 1 to more than 5m teu.

Captain Xu Lirong, chairman of Cosco Shipping said his company would support the CSP Abu Dhabi Terminal by developing shipping routes and a transhipment network to drive volume growth. The terminal will benefit from a feeder service network as well as connectivity with other container terminals at Khalifa Port. China is the UAE's largest non-oil trade partner. In 2017, bilateral trade between the countries increased by 15% to more than $53bn, representing 14.7% of the UAE's total foreign trade. During the same period, the UAE accounted for nearly 30% of total Chinese exports to Arab countries and about 22% of total Arab-China trade. Bilateral trade is expected to increase to $70bn a year by 2020.

It is hoped that the new terminal will act as a catalyst for Chinese companies to set up in the free zone alongside the port. A demonstration zone was opened at Khalifa Industrial Zone Abu Dhabi by Chinese Jiangsu Provincial Overseas Cooperation & Investment Company in August 2017, and to date a total of 19 Chinese firms have signed land lease agreements there.