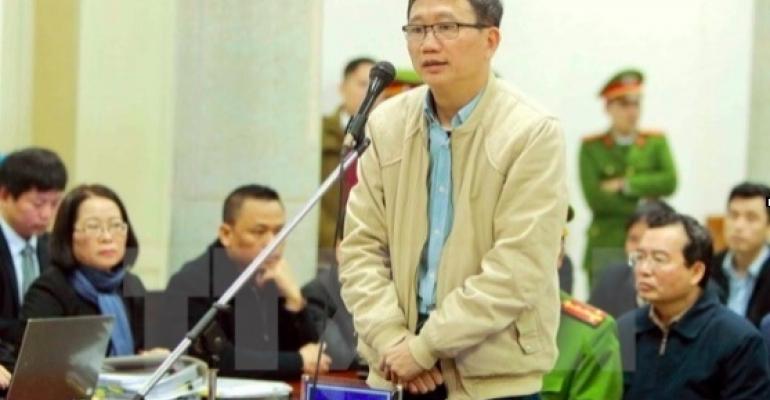 Vietnam’s Hanoi City Court has sentenced a former oil executive to life in prison for embezzlement and violating state rules. Trinh Xuan Thanh, former Chairman of the PetroVietnam Construction Joint Stock Corporation (PVC), was given a life sentence by the Hanoi City court on Monday, as part of a widespread corruption crackdown, state media reported.

The court also jailed Thanh's former boss and board chairman of the parent company PetroVietnam (PVN), Dinh La Thang, for 13 years for his role in incurring million-dollar losses at the oil giant.  Thang served as PVN board chairman between 2006 and 2011 before taking on political positions as the transport minister and later party leader of Ho Chi Minh City.

Twenty other officials at PVN and PVC were given nine to 22 year sentences.

According to the indictment, he directly appointed Thanh as general director of PVC in December 2007 and boosted his power through various corporate decisions. Under Thanh's leadership between 2008 and 2012, PVC incurred losses worth more than $5m.

According to assessment of the judge council, the defendants have caused great damage and losses to State property due to their serious violations of economic management regulations. The defendants’ wrongdoings also caused serious consequences on society, stated Vietnam media.

The judging council decided to give Dinh La Thang, who basically admitted to his wrongdoings a more lenient sentence plus the additional punishment of banning him from holding certain positions and jobs for certain period, taking into account his good career performance in the past and clean police record.

For Trinh Xuan Thanh, whose offences call for the capital punishment, the judging council gave out the life sentence considering that Thanh and his family voluntarily paid back the appropriated money and Thanh himself admitted to the illegal behaviour. The fact that all members in his family are officials with contributions to the State was also taken into consideration.

“The trial of many defendants who used to hold high positions in the Party and State apparatus as well as in State-owned enterprises demonstrates the firm resolve of the Communist Party of Vietnam and the State to fight corruption and wastefulness through upholding the rule of law,” said VietnamNet.