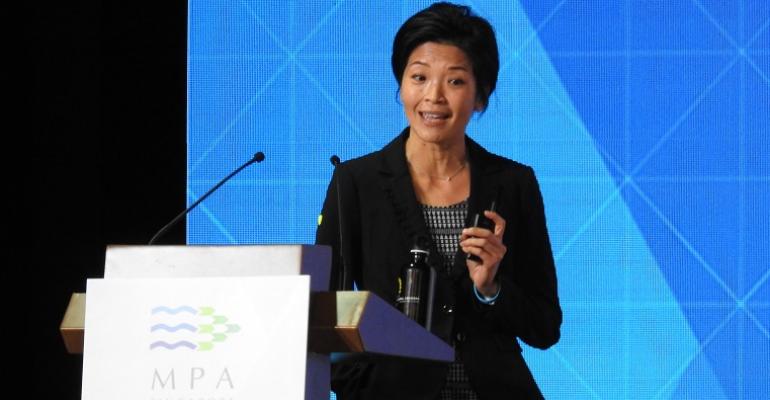 Prof Lynn Loo speaking at the Singapore Registry of Ships Forum
Singapore’s new Global Centre for Maritime Decarbonisation (GCMD) has launched its first invitation for proposal related to the safety and operations for ammonia bunkering.

The invitation for proposal was announced by the centre’s CEO Prof Lynn Loo at the Singapore Registry of Ships Forum on Friday.

“The invitation is around proposals to define the safety and operation envelopes to enable ammonia pilot demonstrations in Singapore,” she told the conference. The announcement comes two months after the GCMD was set up.

In terms of what areas the new centre should focus the project dovetails with a gap that it has identified in terms of the safety and operations around transporting green fuels.

However, Prof Loo also stressed this did not mean they were saying ammonia was the solution. “To the contrary we believe that we require of portfolio of solutions to think about decarbonisation.”

The proposal deadline is in December and once proposals have been reviewed the study will start at the beginning of 2022. The aim is to complete the study within that year with centre facilitating discussions with relevant regulatory bodies.

“This report then will support regulatory sandboxing and pave the way for an ammonia bunkering project,” she explained.

The GMCD has already spoken with a number of committed partners from across the supply chain for the study.