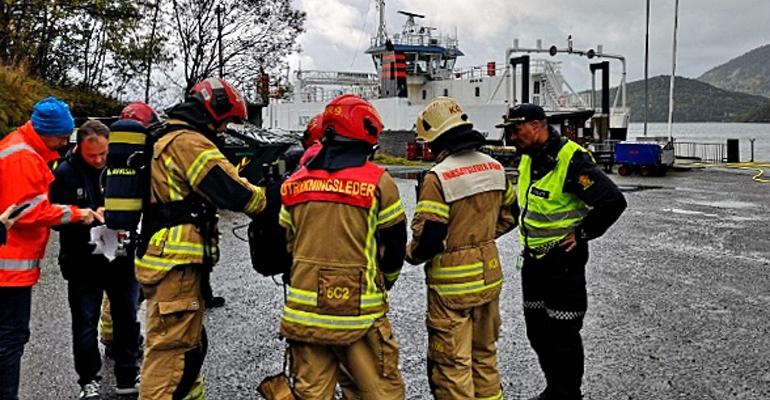 A fire on the newly converted hybrid car ferry MF Ytterøyningen on 10 October was probably caused by a leak in the battery system’s liquid cooling circuit, according to an investigation of the incident.

The 2006-built ferry, owned by Norled – one of Norway’s largest ferry operators – and converted to hybrid operation earlier this year, was in normal operation, running on its diesel engines, when the fire started.

The vessel was able to return to port under her own power, was successfully evacuated, and none of the 12 passengers or three crew members was hurt. No environmental damage was caused.

Led by the Kvinnherad police in Norway’s Hordaland, the investigation was carried out with fire engineering expertise from the Norwegian National Criminal Investigation Service, DNV GL, Norwegian Maritime Authorities, Corvus Energy, insurers and other stakeholders.

In what it described as a ‘preliminary conclusion’, Corvus Energy said: “The most probable cause of the fire was leakage in the battery system’s cooling circuit. Findings indicate that a twisted gasket, intended to seal the cooling plate outside of a battery module, is the most probable cause of the leakage. It is too early to conclude whether the twisted gasket was a result of the recent service work on the cooling system or if it was caused by other reasons.

“The leakage created arching between electrical components at pack voltages of 1,000Vdc, igniting a fire,” the battery manufacturer continued. “The fire was fuelled by ethylene glycol components from the coolant and caused external heating of battery modules.”

Owing to service work, the battery system was not connected to the ship’s systems, Corvus noted. As a result, no alarms from the battery system were sent though the ship’s alarm system. However, the battery manufacturer’s patented and certified Corvus Passive Single Cell Thermal Runaway isolation safety system appeared to have operated as designed and intended, probably limiting damage from the fire.

The ferry’s Novec 1230 inert gas system and its salt-water fire sprinkler system were used during the incident. However, indications suggest that activation of the sprinkler system made matters worse by causing several short circuits.

Lars Alvestad, Acting Director General of Shipping and Navigation at the Norwegian Maritime Authority, said: “We still feel confident that the batteries do not pose a greater risk than more conventional energy sources on ferries. However, such an incident demonstrates the importance of continuously working on making improvements with regards to routines and safety measures. Therefore, the finding from Corvus and the report from the Norwegian National Criminal Investigation Service, as well as our own participation in the investigations, will be important contributions to the continued work on the phasing in of new technology.”