Ever Given blocking Suez Canal re-floated 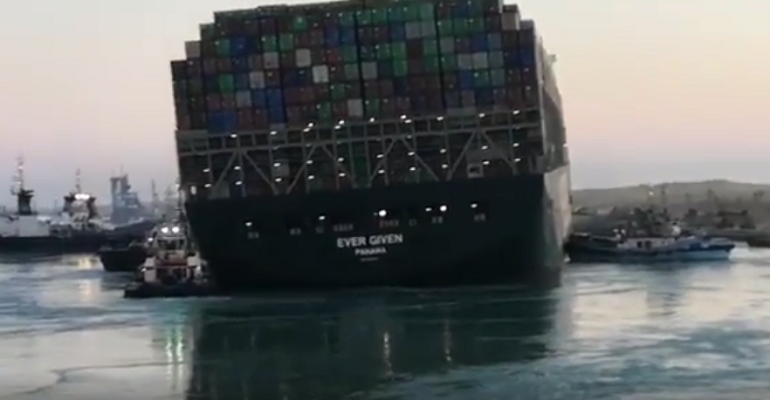 The Ever Given, containership blocking the Suez Canal, has been re-floated, and manoeuvres are set to be undertaken to fully restore the direction of vessel.

The Suez Canal Authority (SCA) said the grounded containership had been successfully re-floated with the stern of the vessel now 102 m from the bank of canal rather just 4 m previously.

Manoeuvres were set to restart at 11-30am local time, during high tide, to fully restore the direction of the vessel so it can be towed for inspection.

Admiral Osama Rabie, Chairman and Managing Director of the SCA navigation of the canal would be resumed immediately upon the complete restoration of the Ever Given’s direction and moving it to Bitter Lakes for technical inspection.

A number of videos showed the containership having been pulled free.

The Ever Green grounded in the Suez Canal on 23 March, blocking the key waterway between Asia and Europe, after being hit by a sandstorm

The news that Ever Given has been successfully re-floated without having to lighter cargo from the ultra-large containership, spares what could have been weeks of closure for the canal while such operations were undertaken.

However, clearing hundreds of vessels currently waiting to transit the canal could take at least another week even once the Ever Given has been successfully sailed out of the waterway.

In a customer advisory Maersk Line said that the Suez Canal had a capacity for 50 – 85 vessels to transit daily from both directions. It noted that once the canal was re-opened it was planned to run convoys continuously.

“They are assessing the current backlog of vessels as of the 27th of March, and we would expect that it would take 3-6 days for the complete queue to pass, conditional to safety and other operational circumstances. As more vessels either reach the blockage or is redirected, this is an estimate and is subject to change,” Maersk said.

Containers such as Maersk and 2M alliance partner MSC have already started to divert vessels to the longer route around the Cape of Good Hope as the number of vessels due to transit the canal continued to grow.