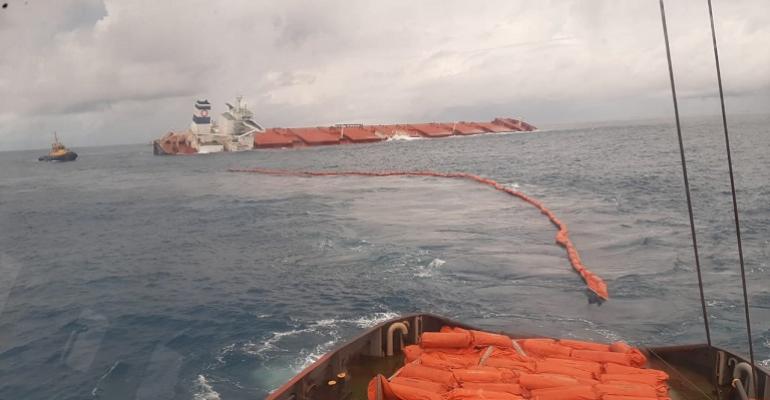 Vale said that two oil spill recovery vessels (OSRVs) from Brazilian state oil firm Petrobras has reached the grounded VLOC 100 km off the coast of São Luís, in the state of Maranhão, Brazil.

The 2016-built VLOC is chartered by Vale from Polaris Shipping in South Korea and it said that according to the owners the vessels fuel tanks remain intact and are located on the stern of the vessel on the opposite side to where the vessel is damaged. There are fears that the fuel tanks holding 3,500 tonnes of marine fuel oil and 150 tonnes of gas oil could rupture causing a major oil spill.

“The OSRV vessels were requested from Petrobras for preventive reasons, as part of a set of actions to contain any oil leakage. Thus far, the MV Stellar Banner has been preventively surrounded by a 200 m barrier made of buoys suitable to contain oil in the sea,” Vale said.

Polaris Shipping said in a statement that the oil barrier had now been removed and an anti-pollution team remains on standby.

The shipowner is now moving forward with plans to de-bunker the vessel. "Thanks to the orchestrated effort from multiple parties, including Vale, the company is now seeking to accelerate arrival of a bunker barge at the site to offload remaining fuel oil in the tanks," the company said.

"The detailed de-bunkering plan was submitted to the Navy for review and the operation will be completed in the coming weeks, weather permitting."

Polaris said the vessel grounded on a sandbank remained stable under its own power.

The 2016 built, 300,660 dwt VLOC Stellar Banner suffered damage to its bow after leaving port in the northern Brazilian state of Maranhao on 24 February, its crew of 20 were safely evacuated.

The vessel was bound for the Chinese city of Qingdao with 275,000 tonnes of iron ore, according to Refinitiv data.