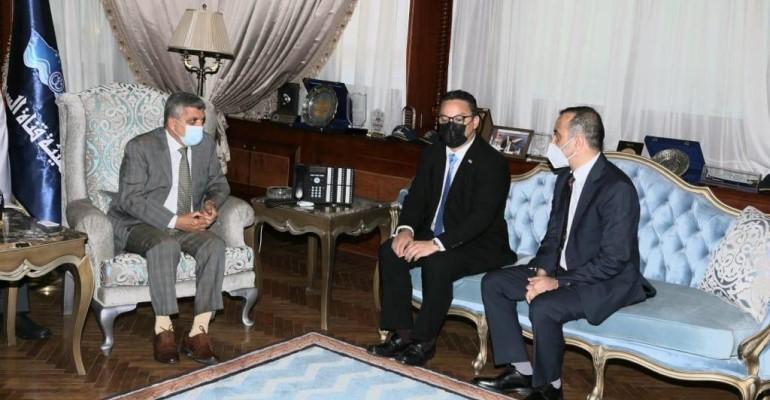 The Director General of the Panamanian Merchant Marine, Rafael Cigarruista, visited the Chairman of the Suez Canal Authority (SCA) Admiral Osama Rabie, to learn about the current situation of the Ever Given.

Cigarruista went to Ismailia on behalf of the Panama Maritime Authority (AMP) and was accompanied by Panama’s Ambassador to Cairo, Alejandro Gantes, on a mission to learn about Evergeen’s Panama-flagged container ship.

The ship is currently being held in Egypt as parties seek compensation after Ever Given ran aground in the Suez Canal in March, blocking the key shipping lane for almost a week and cuasing damage to the canal walls.

During the meeting, Cigarruista drew attention to the commercial importance of co-ordination between the parties, and establishing a rapprochement between the AMP and SCA to agree upon a joint report and submit it to the International Maritime Organisation (IMO).

The Egyptian media noted that the meeting aimed at discussing “ways of joint cooperation, including a solution to reach an agreement on the compensation sum for the Ever Given stranding”.

Related: All vessels stranded by Ever Given grounding clear the Suez Canal

The head of the SCA Admiral Rabie explained the current legal status of the vessel and its crew and noted that the vessel is currently under a court order of preventive reservation. He also gave an update on the conversations being held with the owner of the vessel, in order to reach an unofficial payment solution and be able to release the vessel.

According to the Egyptian press, at the end of the visit, Admiral Rabie said SCA was ready to work with parties either through litigation or negotiation. He added that SCA hoped to resolve the matter as soon as possible and was ready to respond to any requests from owners of Panama-flagged vessels.

“That includes the possibility of discharging the ship's cargo into another ship or the procedures for changing crews—except for the captain who is the judicial guardian of the ship. Rabie pointed out that such requests now fall within the jurisdiction of the concerned court only, and the SCA cannot decide on the matter,” reported the Egyptian press.