Crisis to cause ‘unprecedented decline’ in container traffic: Clarksons 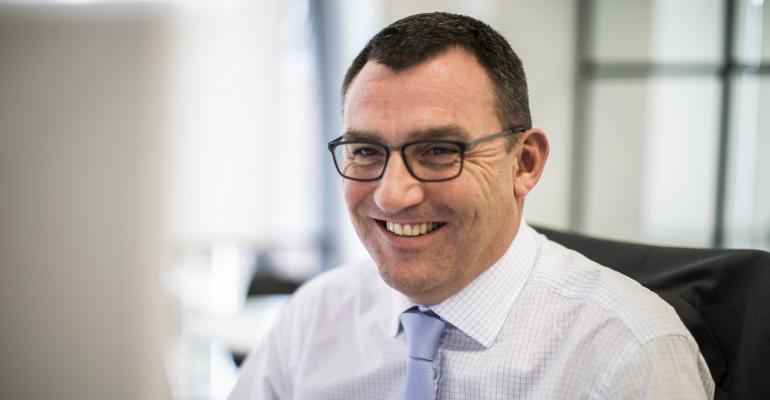 Trevor Crowe, Clarksons
The COVID-19 pandemic is projected to lead to an “unprecedented decline” in world container trade, according to Clarksons Research director Trevor Crowe.

Crowe told a webinar on Container Shipping and Ports organised by Ernst & Young (EY) and Maritime London this week that global containership calls were down by about 5% in the year to date at 21 March, while those by vessels of 8,000 teu and over dropped 10%.

This has led Clarksons to forecast “the biggest decline in containership trade on record,” which is expected to exceed 10% for full-year 2020, outstripping the fall of 7-8% that followed the 2008 financial crisis.

At the same time, the idle container fleet currently stands at around 11% in capacity terms, while containership charter rates are down by around 30% since the beginning of the year, Crowe added, and were “edging back down to operating cost level at an alarming rate.”

Future growth predictions for container shipping depended on future trends and counter trends, Crowe said, which elsewhere in the webinar were outlined as including the possibility of greater near-shoring, re-shoring and multi-sourcing of supply chains.

Some good news is that container shipping’s emissions have already been reduced by 30% since the baseline 2008 level, Crowe concluded, but a big part of this has been through slower steaming and achieving further reductions represents a “critical challenge for the containership industry.”

DP World coo for Ports & Terminals, Tiemen Meester, described recovery from COVID-19 as “a script that hasn’t been written”, pointing out that all the UAE-based groups efforts so far had been directed towards hygiene, safety and ensuring ports keep working.

Recovery from the impact of the pandemic will not take place in 2020 but will be “a one-, two- and maybe three-year problem,” he opined. In the meantime, “companies seem to be looking to how they can sustain themselves” and were adopting a “disciplined capex approach.”

The last point was echoed by Jonathan Beard, EY Partner - Infrastructure Advisory, who spoke of capex being “incredibly constrained” for the next two to three years. Port investments in the short term were therefore likely to include piecemeal improvements such as automation of gates, scanners and RTGs rather than any large greenfield projects, the webinar panel felt.

Wim Dillen, international development manager at Port of Antwerp, took a slightly more optimistic view, describing the COVID problem as “already bottoming out,” but agreed that its impact would still be “very hard’ in May and June. He predicted “a lot of blank sailings and depressed container flows for the rest of the year,” adding that Port of Antwerp didn’t expect to see a recovery until “the middle or end of next year.”

Looking ahead, Dillen said ports needed to be more “adaptive” in order to deal with the next ‘black swan’ event. The COVID crisis had only accelerated the need for digitisation, he added, since ports would have to react to more diverse and therefore complex supply chains in the future.

Before then, collaboration across the port ecosystem is vital, various webinar speakers agreed, in order to deal with “the challenges caused by COVID’ - with the immediate priorities, in the words of Meester,  being “hygiene management” and “getting people in and out of ports safely.”