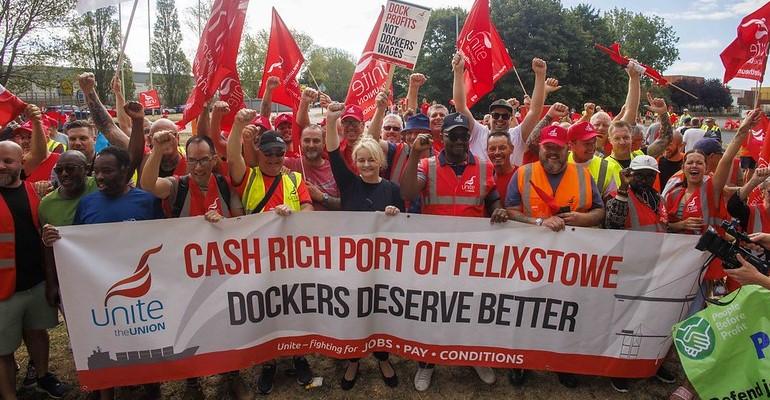 Workers on the picket line at Felixstowe, September 2022
An eight-day strike at the UK’s main container port has come to an end, but the impact will continue to be felt in the coming months and further action could be on its way.

Supply chain risk company Everstream Analytics said carriers have avoided Felixstowe during the strike, with ship calls dropping by 82% from 29 in the week of August 15 to just five in the following strike week.

“The large-scale vessel diversions have led to higher congestion levels, especially at German ports that have battled labor actions on their own in the last few weeks,” said Everstream.

Waiting times at Hamburg hit a peak for the year of 42 hours last week and at Bremerhaven, 18 vessels per day waited at anchor to berth, another 2022 high and around 63% above the annual average.

The strike at Felixstowe has ended, but the underlying issue of pay is yet to be resolved.

“The ball is now firmly back in Felixstowe’s court. The employer has the opportunity to make a greatly improved offer which will end this dispute. If the employer declines this opportunity, then further strike action is expected to be announced in the coming weeks,” said a spokesperson for Unite the union.

Unions have proposed September 19 as a potential date for more strike action, potentially with fellow dockworkers at the Port of Liverpool striking alongside workers at Felixstowe.

“Knock-on congestion and delays on other European ports are therefore likely to occur in the coming weeks as well as we head into the beginning of Q4 and the holiday season,” said Everstream.

Port owner Hutchison said it offered a “very fair” 7% pay rise to workers along with a one-off £500 bonus.

The threat of further industrial action comes at a time of widespread strikes in the UK, including by rail workers, barristers, council workers, and postal workers. The most prominent reason for strikes is insufficient pay increases in the face of high inflation.

Unite, the union behind the Felixstowe strike, has had recent success in the UK maritime sector. Workers at ferry operator Red Funnel voted to accept a two-year pay deal of between 13.4% and 18.3% covering members including ratings, shunters and customer service staff.

The strikes are the latest in a series of disruptions to the UK supply chain, adding to complications from Brexit regulatory changes, pandemic impacts, and the loss of ferry capacity during the P&O Ferries debacle.