Hapag-Lloyd believes LNG a good fuel choice ‘at this time’ 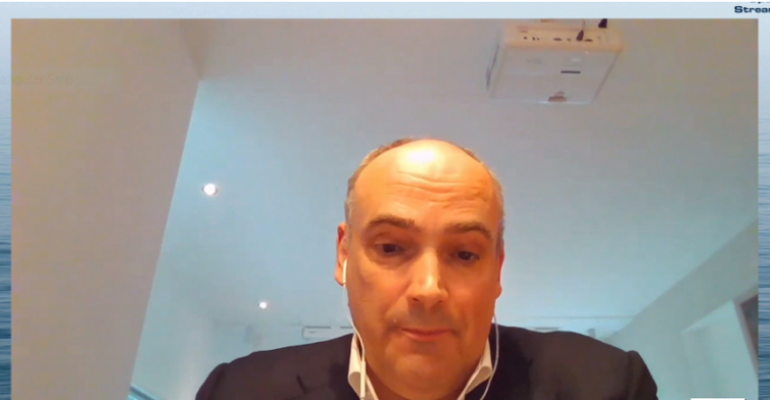 Rolf Habben Jansen, ceo of Hapag-Lloyd
Container line Hapag-Lloyd believes LNG as fuel is good choice at this time with the possibility of using synthetic gases at a later date, but in the future other fuels may also come to the fore.

Speaking on a panel at SMM Digital Rolf Habben Jansen, ceo of Hapag-Lloyd said the fuel choice of the future for a zero-carbon shipping industry remains unknown.

“In reality we don’t know that yet and dependent on what the flavour of the day is people have a preference for one or the other. We try to look 20 – 30 years ahead, the honest answer is we don’t know yet,” Habben Jansen said.

The Hamburg-headquartered container line taken the decision to have a small number of LNG-powered ships, both retrofit and newbuildings. The conversion of Sajir, renamed the Brussels Express, has been completed at the yard and the line has also ordered six LNG-powered newbuildings.

“We have opted to build a couple of ships that going to run on LNG also because those ships will also have the option to run on synthetic gases as well which is in our view at the moment the most likely technology that will prevail over the next couple of upcoming years,” he explained.

“There’s going to be a lot of development over the next four five years and then we will have a lot more choices especially for the smaller ships, for bigger ships it will possibly take a bit longer. That’s why I believe LNG or gases is actually a good choice at this time.”

He said it remained to be seen if LNG would be the choice Hapag-Lloyd would make in the future.

“But we just believe you must try to make steps forward to make the industry more environmentally friendly. There will be other fuels coming up as well and I don’t think we’re going to have a 100% LNG powered fleet,” Habben Jansen said.