ONE to invest $20 billion over next decade

Photo: Screenshot from ONE briefing 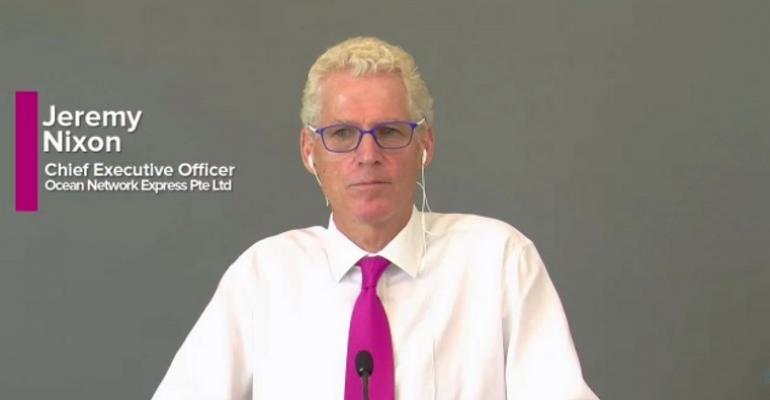 Container line Ocean Network Express (ONE) has mapped out a $20bn investment plan over the next decade, the majority for new vessels to help meet decarbonisation targets.

The $20bn investment plan from 2022 – 2030 was revealed by Jeremy Nixon, CEO of ONE, at an online briefing on Wednesday. Just over 50% of this investment would be in newbuildings, while the remainder would cover terminals, technology, and other areas such as containers.

Nixon said the investment strategy would equate to around $2bn a year.

Looking at new vessels Nixon said, “Since 2020 and 2021, we've been active in terms of securing medium to long term, charter tonnage.

Related: Container lines get closer to customers with logistics, but may not suit all

“So that process has already started, and those assets will start to come online quite soon and replace ships that are due to come off charter, and also help to improve our overall efficiency and slot cost and also improve our carbon intensity, as well reducing making us greener in terms of our footprint,” he explained.

To meet its newbuilding requirements and decarbonisation targets ONE plans to invest in roughly 150,000 teu of capacity a year. The company expects to bring in about 1.2m teu of new capacity between 2022 and 2030, with a fleet growth of around 600,000 teu over the period once replacement tonnage has been taken into account.

In terms of ONE’s future fleet composition there will be some changes as it returns ships from its shareholders – NYK, Mitsui OSK Lines, and K Line  – and looks to longer term charters and potentially more owned tonnage. Nixon explained that in 2021 ships chartered from its shareholders made up around 75% of its total fleet but 2030 this would have reduced to around 20%.

Nixon declined to give specific on new order plans but did say: “It would not be surprising if we were looking at potentially more orders in the future and maybe not just charters, but potentially actually direct purchases.”

In terms of the ratio of chartered to owned vessels he said that the company did not have any specific commitments. It will, however, shift away from having so much in the way of short-term charters. “We really want to take back control and have more long-term core tonnage ourselves and long-term charters or owned.”

As stated previously Nixon said the company was not planning to diversify with the acquisition of logistics companies as some of its larger competitors have done, and he declined to comment on the possibility of buying smaller lines.

The newbuilding strategy forms part of ONE’s aim to have net-zero emissions by 2050. Nixon noted there were not enough green fuels available for the industry to move very soon to zero carbon emissions and it was a long-term journey. The company is looking at different green fuels including hydrogen, ammonia and methanol.

“So, I would say at this stage, we are now moving into the phase where we are starting to make our own orders as ONE, our own newbuilds, and each year as we make that investment choice, we will look at the very latest technology and try to make sure we make a decision that is right for the short, medium and long term,” he said.