DNV GL promotes use of drones in survey work 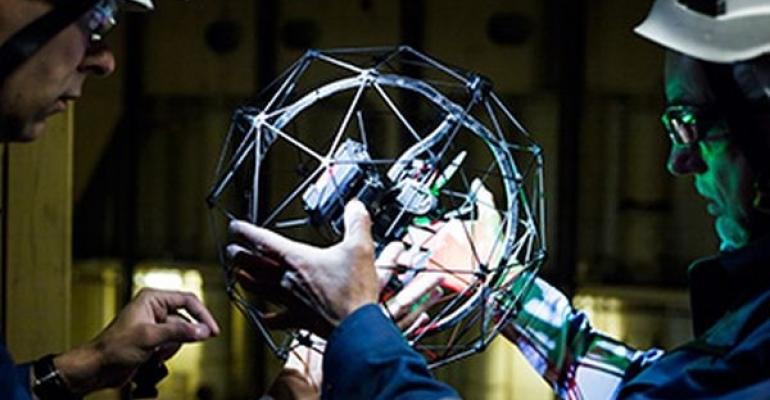 Unmanned drones can bring great advantages when used responsibly – unlike last week’s incident near London Gatwick where they led to 36-hour shutdown of flights – DNV GL officials highlighted at a special pre-Christmas briefing on the Benefits of Digitalization hosted jointly with Hapag Lloyd and HHLA in Hamburg.

The event took place at the pre-opening of the premises of high-tech start-up VRHQ, which aims to become “the lighthouse for VR (Virtual Reality) and Augmented Reality in Europe.”

DNV GL was the first classification society to accredit a survey by the use of drones, in June 2016, and is now further exploring how to use the technology to save time and cost for shipowners. It has already rolled out drone surveys through five of its major service hubs across the world – Gdynia, Dubai, Singapore, Shanghai and Houston – with further expansion planned in 2019.

Drones can avoid the need for surveyors to enter tanks or scale great heights, explained DNV GL officials, thereby improving safety and efficiency, in some cases removing the need to erect staging inside ship compartments which can cause damage to coatings.

Also, traditionally a visual verification has required the surveyor to be on board but in some cases that might not be necessary in the future with use of new technology such as VR, increased connectivity and digital tools, says DNV GL.

“The use of drones, VR and other remote hull survey tools leads to a reduced cost level and less interruptions of ship operations,” concluded the classification society, “the enrichment of data allowing the gain of new insights and enhanced safety management.”

Hamburg terminal operator HHLA highlighted how it was also using drones for inspection work, for example of quay walls and SPS cranes, and site security. It also plans to use them for the exchange of urgent documents and spare parts, and is evaluating how they might be useful for empty container (spare part) logistics.