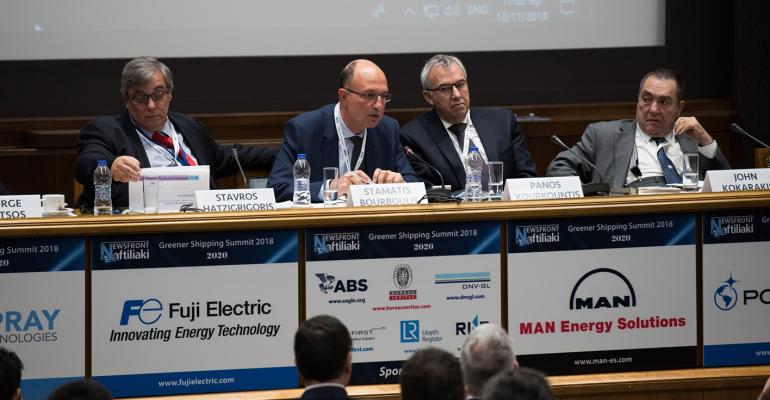 The use of scrubbers to meet the 2020 sulphur cap, their lack of regulatory framework, and impact on the market were very much under discussion at the Greener Shipping Summit in Athens last week.

Indeed, many questions were asked and many opinions expressed as the quality and the cost of the compliant fuels and the environmental impact of the open loop scrubbers proved serious points of concern.

But, as conference chairman Panos Kourkountis, technical director of the George Procopiou-backed Sea Traders, said "they are not the only ones". As was evident, "cheaper fuel and the premium on the charter rate of ships with scrubbers, will consequently lead to operation with increased speed and consumption and the proportional increase in emissions", said Kourkountis, echoing the opinion of many.

"These additional emissions related only to the cheaper fuel are expected to be similar for all type of scrubbers: open loop, close loop or hybrid," he said at the end of the summit, organised by Newsfront/Naftiliaki in conjunction with, and under the auspices of, Greek shipping's technical body, Martecma.

The interaction was intense but what was clear was there is no turning back as the impact of the forthcoming evolution in new shipping regulations and the challenges attached to complying with them was assessed.

"The constantly increased concerns regarding the negative impacts of the scrubbers on the environment are not the only risk that accompanies investment in scrubbers," noted Kourkountis.

"The regulatory framework is blurry and still being elaborated. A very serious technical issue is the lack of proper performance standards. The makers of the scrubbers have the freedom to use a variety of materials and construction standards. Except for SOx levels there are no clear requirements on the other substances which are formed during the exhaust gas cleaning process and which are also emitted,” said Kourkountis.

Furthermore, there are no IMO approved scrubber systems. "We must remember the first BWTS, though IMO approved, are not in compliance with the latest Imo and USCG standards. We should not be surprised if the scrubbers have a similar fate," believes Kourkountis.

The role innovation is playing in the industry's future as well as how best, and what is available to enable ship operators to meet the regulatory requirements was debated as equipment manufacturers presented their solutions. It was often expressed that the regulators are the game changers and the shipping industry navigates in the uncertainty.

“The price, quality and availability of fuels, the complications and reliability of the scrubbers, the lack of performance standards, the environmental impact of the scrubbers, the position of local authorities and many more unknown factors make the 2020 issue as complicated as roulette. Investors must remember the roulette ball does not always stop where the money has been placed," said Kourkountis.

As John Cotzias, president of the Hellenic Shipbrokers Association (HSA), pointed out when talking about scrubber investment payback, "alternative and compliant fuels are likely to be utilised in smaller and of lower value vessels, whereas scrubbers will go on board larger vessels", but whatever the choice it will present a major challenge for ship operators and suppliers of compliant fuel and makers of equipment aimed at cutting emissions from ships.

Given also that scrubbers penetration can not exceed levels which are already well-known, Cotzias said "it appears low sulphur blends will be the immediate solution of the marine fuel market". As he and many others pointed out this involves addressing fuel quality and blend consistency as well as physical availability in quantities and localities. "There will be volatility and uncertainty in both supply and demand for fuel," said Cotzias.

He drew on public statements like: "We believe ships should switch fuels rather than install scrubbers. It is better to produce cleaner fuel rather than clean up the fuel in the ship."

LSFO demand to be comfortably met

Manos Migadis, newbuilding manager Dynacom Tankers believes that by 2025 LSFO demand should be comfortably met by refineries providing good quality fuels at normal prices, therefore running on HSFO with SOx scrubbers might be disadvantageous. While he agreed LNG as fuel is a good solution there are risks associated which have to be addressed, in order for the long safety record of LNG carriers to be maintained in vessels involved in LNG in the fuel chain.

Migadis said slow steaming is a simple solution to mitigate the impact of the global sulphur cap on shipping and the world’s economy during first years of its implementation.

Antonis Trakakis, chief technical officer of Arista Shipping-backed Project Forward Shipping said in seeking alternative fuels LNG and LPG are the most prominent future candidates. LNG has historically much lower and quite less volatile price and is the most cost effective fuel to be produced in carbon neutral form, through carbon capture technologies. He said studies and calculations of Project Forward have demonstrated a fuel mix of fossil and carbon neutral methane can easily reach even the most ambitious targets of IMO.