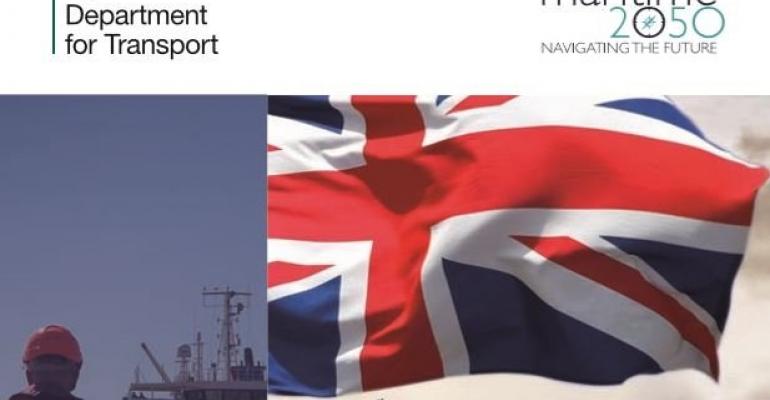 These days it is almost impossible to discuss or view anything taking place in the UK except through the Brexit prism. Truly, it’s hard to remember a time when it was otherwise. What on earth did we used to talk about?

This week the Department for Transport (DfT) has launched Maritime 2050, the first ever long-term strategy for the UK’s maritime sector. Developed in close collaboration with Maritime UK, the umbrella body for the UK maritime industry, this strategy is obviously good news; it is evidence that the UK Government has recognised the importance of the maritime sector, and it is evidence that all sectors of the industry have successfully worked together to get a cohesive message across. Maritime UK has done some remarkable work – not least in building relationships with politicians and civil servants, and in delivering a well-tuned, coordinated approach.

So what did I do? I clicked on the executive summary (52 pages) and searched for the word ‘Brexit’. Readers, it wasn’t there. But not to worry. I found ‘EU exit’ twice:

First, in the introduction: “As the UK looks to reframe its relationship with the world, the time is right to set our vision for the future of the maritime sector. We are confident the maritime sector will thrive and strengthen, as it harnesses the opportunities that EU exit brings.”

Second, in the section on trade: “UK trade operates within a global rules-based framework, to date under the auspices of the European Community and the European Union. Following EU exit we will be able to sign bespoke trade deals and align trade policy with national economic interests. Regaining our independence at international fora such as the World Trade Organization (WTO) will allow us to intensify current support for the rules-based system, maximise our influence on shaping the future of the sector and its role in facilitating global trade.”

Oh, the irony of a vision that looks forward more than three decades and publication of the DfT’s detailed freight forecasts on the same day, when the UK actually has no idea what will happen in nine weeks’ time. March 29, the date when the UK is officially due to leave the European Union, looms ever larger.

But let’s put that to one side, except to stay that Brexit has, at least, raised the profile of the maritime sector and the importance of trade.

Maritime 2050 is based around seven themes: technology, trade, environment, people, infrastructure, security/resilience, and the UK’s competitive advantage. For each, there are recommendations for short, medium and long-term priorities. “Some are for Government, some are for the UK maritime sector, which includes our social partners, and an overwhelming majority will only be achieved through collective endeavour,” says the report.

It isn’t short on detail, either. The full report, more than 300 pages, considers the opportunities to be grasped in new technologies such as autonomy and clean growth; discusses how to drive coastal economic development to create a ‘coastal powerhouse’; highlights the importance of hinterland connectivity, referring to the 2018 Port Connectivity Study which concluded that both ports and the wider economy can benefit from investment to improve hinterland access; emphasises the importance of growing a skilled and diverse workforce; and declares that the Government will work with industry to develop a maritime innovation hub bringing together expertise, support technology development and boost regional productivity.

But then I came to the section about the UK flag and the strategy’s ambitions for “global recognition of the UK Ship Registry (UKSR) as a quality brand”. It says: “Targeted promotion of the UK offer along with ongoing review to ensure the service remains in a leading position are envisaged. Longer term, horizon scanning and government support through the MCA will help support growth.”

The trouble is, P&O Ferries has just announced that its fleet of six cross-Channel ferries are to be switched from the UK flag to the Cyprus flag ahead of Brexit – so that they can continue to operate under an EU flag.

Then there’s the commitment to air quality. “The UK will actively drive the transition to zero emission shipping in its waters, moving faster than competitor countries and international standards to capitalise on economic benefits and be seen as a role model in the field.”

Air pollution is a significant risk to human health, says the report, and Maritime 2050 is concerned with the impact of maritime air pollution on the marine and the immediate coastal environment.

Suddenly, I was back at that B word. This week, schools in Kent have been warned by the county council that air pollution could be so bad from traffic congestion linked to Dover after a no-deal Brexit that they could be forced to go into ‘lockdown’, as well as dealing with potential teacher shortages and disruption to exams.

But I must finish on a positive. Maritime 2050 is “intentionally ambitious”. It says: “If we do not set the ambition high, we risk limited progress. Maritime is truly global and will move where business is best. Therefore, we must maintain and improve our offering. Maritime 2050 is a recognition that our maritime future will not look like our maritime past. While we will not be world-leaders across the entirety of the sector, the expertise we have honed over generations will allow us to lead in certain areas such as technological and environmental innovation, and in high quality maritime business services.”