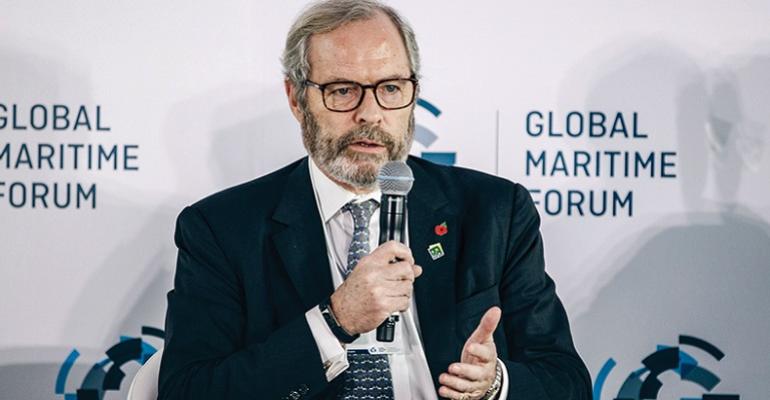 A special briefing on the Poseidon Principles, separate from the Global Maritime Forum’s Plenary Session, held on Day 1 of the just completed meetings in New York, delved into the process of aligning emission reductions pathways with new trajectories- for a 1.5C future temperature increase.

The new guideposts, once established, will go well beyond the existing guidance for ship financiers, which, presently, are built around the International Maritime Organization (IMO) present guideposts of 50% greenhouse gas (GHG) reductions by 2050. Michael Parker, Citi’s top shipping, offshore and logistics banker, who chairs the Poseidon Principles, provided considerable detail in his remarks on how the new trajectories will be established, which will put Poseidon Principles’ ship finance signatories on a path towards net zero by 2050.

Intermediate targets for 2030 will guide thinking. Parker referred to The Net-Zero Banking Alliance (NZBA), an initiative that is part of the broader Glasgow Financial Alliance for Net Zero (GFANZ), which is looking to put targets in place for the end of this decade, by end 2024. He said that the banks need to “retain the connectivity with evolving IMO ambitions”, citing the upcoming MEPC 80, which will occur in Summer, 2023. All going well, in a schedule that Parker outlined, the present emission reductions 50% target, developed by the IMO in 2018, would be replaced with a “well to wake equivalent 1.5C trajectory” that would ideally be aligned with what the IMO decides at MEPC 80- a path looking out towards 2030.

Poseidon Vice Chair Paul Taylor, Global Head of Maritime at Société Générale, said: “Every one of the bank signatories will be bringing climate alignment into their credit decisions….this is all very new…but it’s started and it’s going to intensify with the new trajectory.”

Questions arose along the lines of “What happens if the IMO fails to set out a new emissions reduction target [beyond the present 50% by 2050] at MEPC 80?” In his answers, Parker referred to the NZBA, saying that “2030 is a key date.” Opining on the IMO’s likely revision of its GHG reduction targets, he said, “I am fairly confident that they will have a target for 2030,” but, in the Q and A session, he stressed that the Poseidon Principles could develop trajectories independently of the IMO- were it not to revise its targets.

Related: The Poseidon Principles – focusing on operations and data

Insurance matters were also part of the briefing.  Patrizia Kern-Feretti, Chair of the Poseidon Principles for Marine Insurance, inaugurated during the Summer and now gaining additional members, who is the Head of Marine at Swiss Re Corporate Solutions,  said that all shipowners that she had been in touch with were looking at ways to reduce emissions. She stressed that the Poseidon Principles insurance arm’s benchmark of a 100% reduction in GHG emissions by 2050, which the financiers are now going to be aligning with, depends on accuracy in measuring shipowners’ emissions, and said that: “The Principles are founded on access to transparent real emissions data to benchmark our activity.”

In earlier remarks, Citi’s Parker had noted that Signatories were using the IMO’s DCS data “which is available in the public domain,” and he credited the IMO’s DCS initiative as being integral to the Poseidon Principles forward progress.  Rolf Thore Roppestad, Chief Executive Officer, Gard, and Vice Chair on the Insurance effort, also stressed the usefulness of IMO involvement, beyond the data aspect, saying, “They may move slowly…but we are talking about a long-term trajectory…it’s very important to have them onboard. History has shown that when the IMO is getting in there, it’s really powerful.”

Citi’s Parker said that he hoped for continued alignment between the ship finance and insurance arms of the Poseidon Principles, though he was quick to note that different incentives apply to shipping loans (longer term) versus hull insurance (renewed on an annual basis).

He also offered some hints of future developments, which will bring further collaborations- saying: “You’ll hear some announcements fairly soon…other industry sectors are following what we are doing…and are going to bring in their own Principles…and their may be some examples that we can learn from those…that will enable us to say, as we evolve our methodology, that actually- that’s quite a good idea.

“We can’t be static - we have to maintain the progress,” he opined.