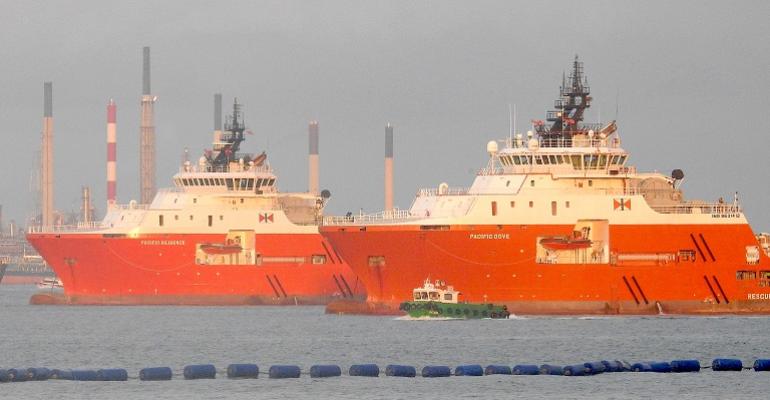 Swire Pacific OSVs at anchor in Singapore
The past year has seen a resurgence in offshore marine activity, first on the back of economic recovery and then on shifts tied to the war in the Ukraine, the same tides that are lifting the tanker stocks to near-term high levels.

With the improved pricing environment onshore comes a fresh bubbling of the offshore oil service sector. Greg Lewis, analyst at BTIG, in a recent report on Transocean (NYSE: RIG) has said: “We believe we are in the early innings of the ongoing offshore rig upcycle, which should provide strong cash flows and refinancing opportunities for RIG to improve its balance sheet."

RIG has now placed multi-year charters on floaters at or above $400,000 per day including a six year deal on its ultra-deepwater drillship, Petrobras 10000, commencing in late 2023. Another listed offshore owner, Diamond Offshore (NYSE: DO) has announced a pair of contracts- on its semisubmersible Ocean Apex in Australia and drillship Vela in the US waters in the Gulf of Mexico.

More drilling increases the demand for service vessels. As the US baseball season moves into the home stretch, analyst James West at Evercore ISI, writing about Tidewater (NYSE: TDW), where he has resumed coverage with an “Outperform” rating, said: “The offshore oil and gas market is in the early innings of what we expect to be a long and strong upcycle. The multiyear underinvestment in the offshore market has reversed and billions of dollars are being poured into growing offshore production.”

Following its acquisition of the Swire Pacific Offshore (SPO) fleet earlier this year, TDW is now the largest owner in the OSV league tables with just under 200 OSVs.  In 2018, following bankruptcy filings, Tidewater had combined with GulfMark International in a $1.25bn deal.

Related: Energy in the spotlight as US offshore oil leases considered

West wrote that: “Tidewater’s average day rates increased to $12.5K in 2Q with much more upside to come. This implies a 24.4% increase compared to two years ago. As a reference, average day rates for the Tidewater fleet during peak cycles were about ~$20.0K. Through the GulfMark deal and the SPO acquisition, Tidewater secured younger and higher-quality Tidewater secured younger and higher-qualit vessels, which will drive premium pricing.”

The SPO acquisition also has enabled TDW to diversify further geographically; Evercore ISI says: “During 2Q, TDW introduced two new distinct segments: 1) Middle East and 2) Asia Pacific. The decision to split the Middle East/Asia Pacific segment was primarily due to the increased exposure in the Asia Pacific market and the size of additional vessels added to the company’s portfolio.”

In line with shipping’s equity analysts emphasis on conservative capital structures, Evercore ISI emphasizes TDW moves in this direction. They note: “We view Tidewater’s strategy to balance financing its expansion while keeping its resources adequate as standing out among its peers. Despite being a capital-intensive business, Tidewater’s strategy to preserve capital, build dry powder for potential accretive acquisitions and shareholder returns, is differentiated from its peers.”