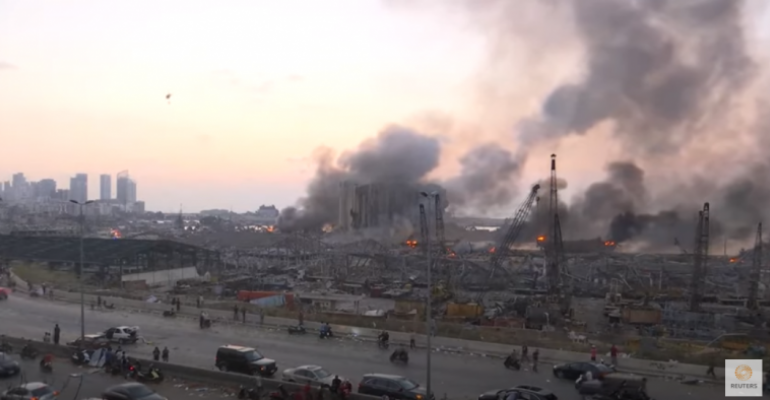 Aftermath of explosion in Beirut port area taken from Reuters video
At least 100 people are reported dead and 4,000 injured in a massive blast at Beirut port.

A fire was seen billowing smoke from a building in the port area followed by a huge blast with a mushroom cloud rising into the air. The blast was heard in Cyprus some 240 km from the Lebanese capital.

Videos show widespread devastation in the port area with fires burning in the rubble of destroyed buildings. The port would appear to have been largely destroyed in the explosion including grain silos which according to Dryad Global stored an estimated 85% of Lebanon's grain.

Shipping agents GAC said: "Yesterday’s explosion and the subsequent blast in Beirut destroyed almost everything in the port and the surrounding area up to a radius of 10 kms. In magnitude, it was equal to an earthquake of 4.5 on the Richter scale."

Vessel tracking services show 10 vessels in the port area in near the approximate location where the blast took place, including the 11,356 teu containership CMA CGM Lyra. Three more vessels are shown in the vicinity. CMA CGM said the CMA CGM Lyra was located 1.5 km from the blast and none of the crew were injured and the vessel was undamaged.

According to Dryad Global the general cargo vessel Raouf H was the closest commercial vessel to the explosion with the Sierra Leone flagged general cargo vessel Metro Star located behind. It also reported that three local tugs are believed to have been in close proximity to the explosion. The condition of vessels in the vicninty following the blast is unknown at present.

A number of interrnational shipping businesses have offices close to the ports.

CMA CGM has 261 staff in Beruit and said that two were seriously injured, and there were many minor injuries, and one member of staff who worked at teh port was missing. "We are doing our utmost to locate him, in collaboration with local authorities," CMA CGM said.

"The group's headquarters in Lebanon, located a few hundred meters from the site of the explosion, was severely damaged."

GAC, with offices near the port, said: "The GAC Lebanon office building, at the entry of the port, has been severely damaged. However, staff are still able to receive emails."

Hapag-Lloyd is represented by agents and according to a spokesman its offices were completly destroyed. All staff had been evacuated from the offices shortly before the explosion and reported to be well. Other damage to loaded containers at the port is currently unknown.

Maersk also has offices close to the port area and Seatrade Maritime News has reached out to these companies.

The explosion is being blamed on 2,750 tonnes of ammonium nitrate which had been stored in a warehouse in the port for the past six years. The BBC quoted Lebanese Prime Minister Hassan Diab about a "dangerous warehouse" which had been there since 2014, but said he would not pre-empt the investigation.a