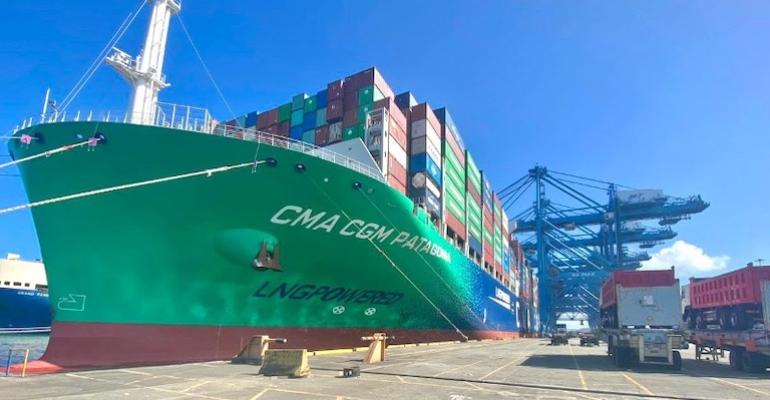 Panama’s Manzanillo International Terminal (MIT) has received the first LNG-powered vessel to dock at a port in the country.

The dual-fuelled French-flagged CMA CGM 15,000 teu-Patagonia, docked at the port facility located east of the Panama Canal Atlantic entrance, in the Bay of Manzanillo, province of Colon.

Early December 2022, the vessel transited the Panama Canal for the first time as part of its assignment to the PEX 3 service that links Asia with the East Coast of the United States.

Related: LNG still the most popular alternative fuel by far

The CMA CGM Patagonia is 366 metres in length and 51 metres in beam, the Panama Canal’s optimal dimensions. Her previous call was Savannah, on the US West Coast. After a short stay at MIT where 1,934 movements were performed, she sailed to Qingdao.

The call underscores the expansion of trading by LNG-fuelled vessels which have been largely focused on Northern Europe and the Baltic Sea, US coastal trades, and Asia – Europe.

MIT, a joint venture between Seattle-based SSA Marine and a group of local investors, began operations in 1995 as the first container terminal in Panama. Ten years later, on July 1, 2005, MIT received the first post-Panamax vessel ever to dock in Panama, the 7,402 teu-Kirsten Maersk, ahead of the Panama Canal expansion inaugurated in 2016 which would allow the transit of post-Panamax vessels.