Shipping an easy target for regulators over bigger polluters 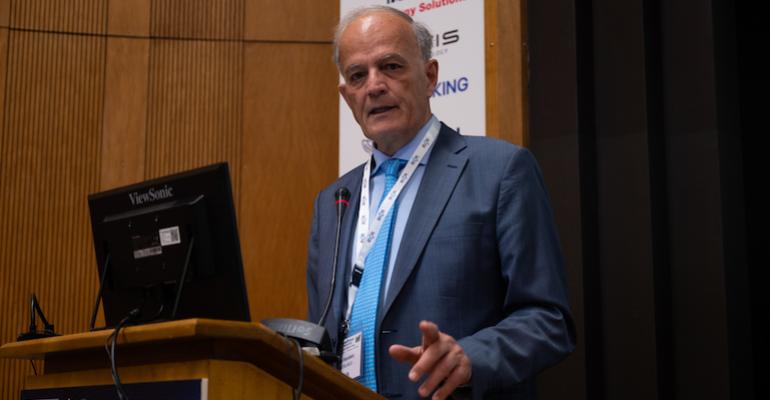 John Platsidakis
As the shipping industry is navigating the winds of change it is to blame for it becoming the focus of world regulators rather than other much heavy polluters, according to John Platsidakis.

Shipping is a peripheral business entity so it was an easy target as it does not have strong political clout and the regulators had a more or less free go at it although their understanding of how ocean going shipping functions is very shallow.

Last week’s Athens Greener Shipping Summit was launched with this comment by keynote speaker, John Platsidakis. The honorary chairman of Intercargo told the 500 strong audience from 230 companies and 16 countries that a communication mistake was made by the shipping community from the beginning of efforts to fight climate change.

“We do care about the environment,” said Platsidakis, saying “do not forget generations of shipowners grew up and spent most part of their lives on board ships with only the sea and the sky in their sight for endless time, we were willing to support the initiative of reducing air pollution by ocean going ships.  So, a strong and clear statement was made: ‘We will comply’. I believe that statement was catastrophic!”

Platsidakis said: “That statement was explained by third parties as an admission of guilt! So, a well intended statement, made with the best of desire to assist, was misunderstood!”

He explained. Had we said “yes, we will do our best to comply as far as we can and subject to the participation of all other active players like the shipyards, engine manufacturers, charterers, bunker producers etc., we would have sent a very clear message and given the opportunity to unaware regulators and the public to understand how ocean going shipping functions and invite the other participants to come along.”

Another opportunity was missed some 10 years ago he said when we should have placed on the debate the imposition of the straightforward levy on shipping bunkers as the classic economic theory says that price dictates demand and vice versa.  In other words, more expensive bunkers would oblige the users of the ships (mostly the charterers) to use the ships in a more efficient way without though stopping shipping to perform.

Nevertheless, although it is late, Platsadakis strongly believes the industry must “tell the public shipping companies do not produce technology”. “Shipping companies use what is available in the market and they do so because they do not have another option as they operate in a highly competitive environment.

“The focus should be on the ones who have to deliver solutions.  Otherwise, the effort is deemed to fail. Governments impose on the car manufacturers emission limits in order to be allowed to sell their cars and not on the individuals who buy a car. Why, in shipping, is it the other way round?” he concluded.

Organised for the 13th time by Newsfront / Naftiliaki in conjunction with, and under the auspices of, Greek shipping's powerful Marine Technical Managers Association, Martecma, it became clear during the 2022 Summit that battling climate change is a massive challenge as some 33 speakers, panelists and delegates discussed navigating the winds of change.