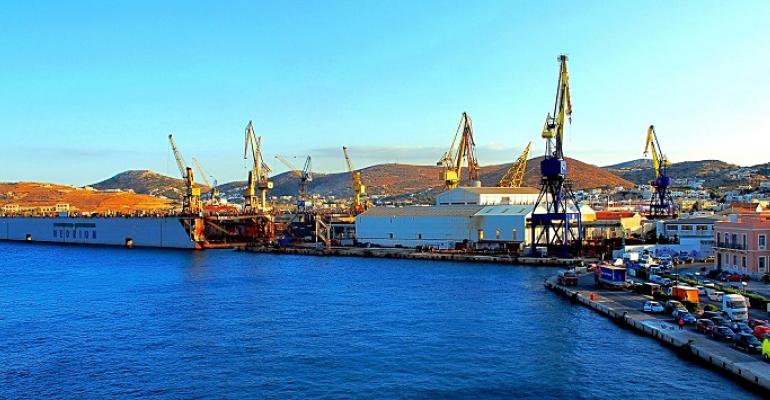 With the apparent backing of the US Navy’s 6th Fleet, Greece’s shipyard sector received several boosts this month when US-backed Onex Group signed an agreement “in principle” to take over the management of debt-laden Elefsis Shipyard, Greece’s second largest shipyard.

The takeover process was quickly taken a step further when a majority of former shareholders of the Onex Group-controlled Neorion SA, which controls the Eleusis-based Elefsis Shipyard and the Neorion yard on Syros, agreeing to sell their stake.

The agreement ‘in principle’ to re-activate the shipyard was signed after the US government’s international development finance corporation agency, DFCgov, had officially expressed interest in the acquisition and revival of the yard located to the west of Piraeus.

The agreement involves application of Greece’s bankruptcy code covering restructuring and rehabilitating proceedings and is dependent on receiving shareholder approval. For the past three years Onex has operated the more successful Neorion Shipyards on the island of Syros.

Negotiations with Onex’s Greek-American owner, Panos Xenokostas, have been going on for around a year.

The US expression of interest came in a letter 26 June received by Greece’s Development and Investment minister, Adonis Georgiadis, in which the head of the US Development Project Finance Agency, Adam Boehler said the investment in the Eleusis-based shipyard will create a very important network that will help and serve the transport of LNG from America and West Africa to Greece and the Balkans. Boehler concluded by saying the successful outcome of the reopening of the Syros shipyards by Onex gives the guarantees for the regeneration of a strategic capital for the country, which will also help significantly to increase jobs.

US Ambassador to Greece, Jeffrey Pyatt said the Elefsis agreement “highlights the opportunities to further develop the energy and maritime ties between the two countries”. Pyatt said: “A successful investment in the Elefsis Shipyard will be good not only for the workers, but also for the US-Greece trade and investment relationship and will establish Elefsina again as a critical hub for the support of LNG tankers, recognising that Greek-owned LNG tankers account for over 15% of global tonnage.”

The ambassador said Onex’s vision is to make Elefsis the main shipyard for supporting Greek, US and international shipowners in the Eastern Mediterranean. He said that with Onex’s investment, the yard can become again a world-class facility, supporting the growing number of LNG ships, the US Navy 6th Fleet, floating regassification units and offshore platforms, and other defense and commercial vessels.

Pyatt’s reference to defense comes after Greece and the US  upgraded a Mutual Defense Cooperation Agreement last autumn that provides for the partial use of the north Aegean Alexandropouli port’s infrastructure by American defense forces.

Pyatt said: “The US values our maritime partnership with Greece, the long traditions of relations between Greek shipping and the United States, the critical support that Greece provides to the U.S. Navy through NSA Souda Bay [in Crete] and through the additional opportunities that we see in ports like Alexandroupoli as a result of our expanded defense cooperation agreement. So, we are committed to this partnership.”