A road to recovery for product tankers 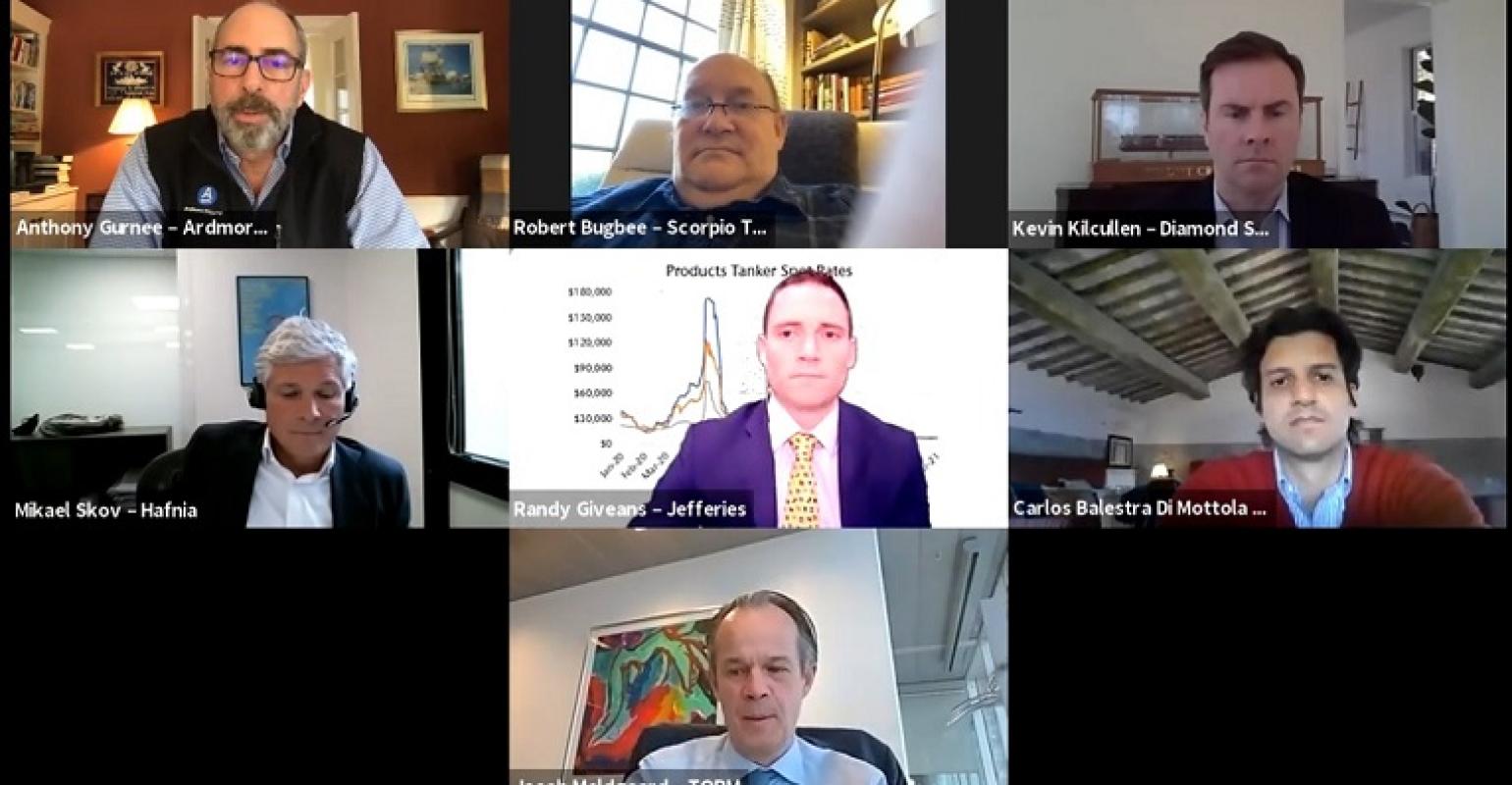 Capital Link virtual conference panel
Both owners and analysts see a positive path ahead for the product tanker market in 2021, particularly in the second half of the year.

Lead shipping analyst at Jefferies Inc., Randy Giveans  wrote in his recent research report on the products sector: “We believe refined products tanker rates are on the road to recovery, especially in the latter half of this year as inventories are worked down and markets normalize post Covid-19.”

A panelist at Capital Link’s early March International Shipping Conference, Tony Gurnee, the CEO of Ardmore Tankers set the stage for the session, putting 2020 in context, saying that “Net, net it was a rollercoaster but net, net a good year”.

Looking forward, panelist Mikael Skov, CEO at Hafnia talked about “the  sentiment scale”, stressing that conversations with charterers are now about time-charters, adding: “We are seeing a rebound in oil demand” and that expectations for 2H 2021 were “to reach the pre-Covid levels”. He said, “People are beginning to look at time-chartering in, and interestingly, it’s for the longer periods.”

Importantly, Skov suggested that this positivity was being infused into the spot market; “When there is strong sentiment, rates move fast and quickly upward,” he said.

Scorpio Tankers chief Robert Bugbee voiced an anticipation that all product tanker size classes will say “rates moving up, and moving up steeply”, citing a growth in long-haul business out of Asia, along with increased business out of the Arabian Gulf, benefitting, LR1 and LR2 categories.

Torm CEO Jacob Meldgaard delved into the specifics of cargo flows, as demand increases, telling the audience that refinery closures in Australia/ New Zealand, as well as in the U.S., Europe and South Africa were giving rise to greater demand for MR vessels. As additional Middle East and Chinese export refineries come online, farther from consuming areas, he said that movements of the same tonnage demand would require more ton-miles, with voyages of greater distances.

In response to questions about inventory levels, Kevin Kilcullen, the CFO at Diamond S, which is in both the products and crude sides, said that much of the de-stocking where tankers previously used for storage are then released back into the available supply had already happened, mostly removing a supply-side  overhang that had worried analysts.

In the Jeffries report, Giveans re-iterated another important topic that has been widely discussed, including in this panel- that of likely low increases in the size of the fleet. He wrote: “newbuilding ordering has been subdued, causing the orderbook-to-fleet ratio to fall to a  multi-decade low of 7%.”

He said that panelists did not expect vessel scrapping to increase in 2021, consistent with a stronger charter market, adding the view of the panelists that: “it might not matter much as vessels over 15 years old often struggle to find employment with oil majors.” He referred to a "Lightning Round", during the Capital Link session, where panel members estimated fleet supply growth of 0-2% in 2021, in the face of  tonne-mile demand increasing 4-10%. Clearly, the sector could be setting up for a nice run.