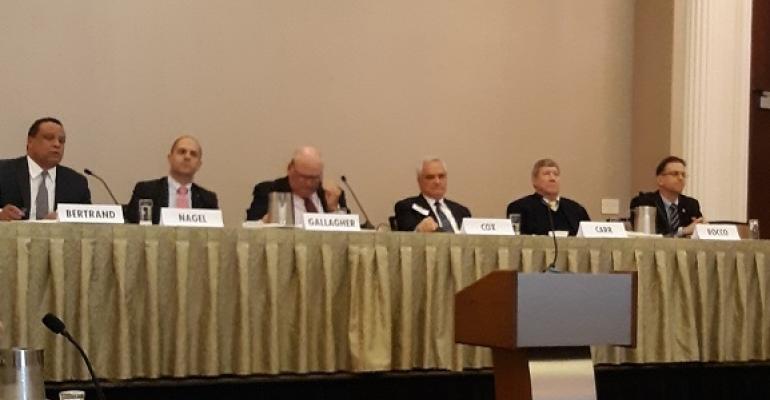 With US oil exports surging there is unprecedented investment in oil processing facilities is underway, and discussions regarding new terminals along the Texas Gulf that could include VLCCs.

But the growth in the region is not without friction and this was the talking point of Mare Forum USA this week in Houston themed “Movement of Energy”.

In his keynote speech, Admiral Paul Thomas, who commands the USCG 8th District, which encompasses the US Gulf Coast, described himself as a “reluctant regulator” who must deal with a triad of “wicked challenges” – overseeing an industry with increased capacity at a time that its environmental footprint needs to be reduced.

At the same time, the complexity of the “solutions”, which include topics such as scrubbers, ballast water treatment, and fuel blend issues, and the uncertainty surrounding them, is also growing. Admiral Thomas, always the pragmatist, implored all attendees to bring “fresh thinking” to the regulatory process, including business incentives for compliance.

Crowded harbours do not bring smooth sailing. The issues facing the port community were brought to light during a contentious, albeit cordial, exchange between a represent of the Houston Port Bureau and a representative from Stolt Tankers - with cargo operations, involving small parcels, at numerous terminals around the port.

The Stolt presentation described Houston’s port as a “victim of its own success,” noting that maritime imports and exports have grown steadily but that infrastructure investment has lagged. It stated explicitly that “the current infrastructure does not allow for efficient maritime operations”.

Read more: Tackling congestion in the port of Houston

Picking up on a theme from Admiral Thomas’s opening remarks, the tanker owner pointed to differing incentives among “stakeholders”- with service providers in the port not bearing the same financial burdens (including demurrage and excessive waiting) as owners and charterers.

The Port Bureau rep countered with a view that transparency of information would play a big role in solving the problems identified. He noted that: “When you are moving around multiple berths, you need information on what’s going to be at the dock…” and that “…to be efficient, you need a coupling of physical assets with digitalization”. Stolt is being pro-active; its representative mentioned that it has increased its barging capacity, it has sought to consolidate shipments, and has participated in efficiency objectives, including an exercise with ExxonMobil.

A representative from the US Army Corps of Engineers provided a perspective from the government side, highlighting a trend where industry would be playing a role in funding navigation improvements, noting the extensive activity planned in the oil and petrochemical sectors.