Equity in the ring – Scorpio and Goodbulk slug it out 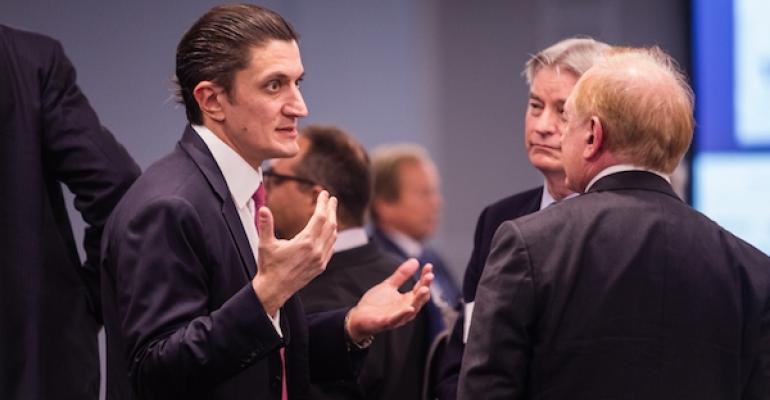 Getting in the ring at last week's Marine Money’s Ship Finance Forum in New York to do battle with the topic of equity fundraising in shipping were Robert Bugbee, ceo of Scorpio Bulkers and Scorpio Tankers, and John Michael Radziwill, ceo and chairman of Oslo-listed Goodbulk.

The discussion, framed as a “boxing match” - think of hard hitting punches and body blows between two sometimes unrestrained shipowners - was moderated by Peter Evensen, now retired from Teekay.

Context and history loomed large here. Evensen, who previously was a banker at a group of institutions that evolved into JP Morgan, had once financed Radziwill’s shipowner relations including the Livanos and Carras clans. Bugbee, in turn, had sold a fleet of suezmaxes to Teekay when he was a top executive at OMI Corporation circa 2008.

The so-called boxing match focused on equity - listed companies and investments by private funds. As a backdrop, Radziwill was seeking to raise money in New York earlier this year, and had to cancel a speaking slot at the three day late June Marine Money event due to a road show for a $140m IPO on the Nasdaq. That deal was not meant to be.

Moving around the ring like a good pugilist, Radziwill said, “The public markets were not giving the same value as we got in the private market…”, in a $10m share raise announced in September, and that “Certain sophisticated investors appreciate the value of our platform.”

Goodbulk has close relations with Cargill, who sold it a bevy of capesize vessels earlier this year and the Carval funds, who maintain a sizable position in its shares. Radziwill was emphatic about the investment potential of Goodbulk, saying “I just want to make money for my shareholders.” He noted the healthy prospects for 2019 - 2020, and pointed to a big chunk of its fleet, roughly 30% , put away on timecharters at profitable hires. Bugbee, who has kept a lower profile in recent years after achieving “shipping celebrity” status, also moved carefully around the ring. In this match, he expended a good deal of his formidable fire-power vocally dissuading conference attendees about the relative desirability of “pure play” companies operating in only one sector of the market, compared to those in multiple segments.

Again, the context of the discussion is important. While Scorpio Bulk has seen its star brighten with dryb ulk’s uptick, Scorpio Tankers with a fleet of MR’s waiting for the upturn, has struggled. In early October, Scorpio Tankers th, facing the prospect of “breaking covenants”, in Bugbee’s words, raised $300m with Scopio Bulkers- its, taking $100m of the tanker shares, and suddenly finding itself no longer a pure play.

He added that: “Public investors in the marketplace can often discount stuff we don’t see at the time”.

Alluding to the downdrafts evident at the time of Goodbulk’s abortive US IPO Radziwill countered by talking about his later “victory” - the private placement - and suggesting that it’s tough for maritime equities to compete against tech for investors’ attention.